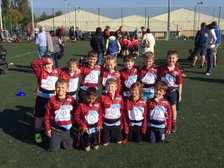 The U7’s came away with 2 hard fought wins out of 3 at Barker Butts in a 3-way round robin tournament with the hosts and Old Laurentians.

As OL’S brought along enough players for 2 teams, Barkers and Camps put together a strong Barbarians side as well as their own teams and came away with a further 2 victories out of 2.

With nearly an hour of match time, all the players got a great run out and really showed how much they’ve come on this season. Good ball handling and support play was complimented by some fantastic running to entertain the large crowd of supporters from the three clubs. The Camp Hill defence was rock solid for the most part and there was some frantic tagging going on to stop the opposition in their tracks (& some diving tags too!!). The total try count for Camps fell just short of 20 so a really top draw performance by the team. Too many tries to remember all the scorers, but well done to all and let’s hope we can take that success into the next game .