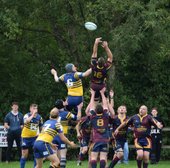 The first away game of the season saw a league and cup double header at Uttoxeter. Coach Neil Pow’s instructions were clear. Take what we do on a Wednesday and put it into play on Saturday. Oh and tackle, tackle everything in sight and for god sake don’t miss one.

Uttoxeter started the game with a good kick off, collected by Soccer who instantly put Cannock on the front foot. The game started at a frantic pace, Cannock fielding a strong side showed their intentions early with some big hard carries from the returning Sonny ‘boom’ Stanaway and ever present Joe ‘Spartan’ Brookes. A knock on from Cannock allowed the Referee to intervene and award Uttoxeter the Scrum. A steady scrum by both camps, Uttoxeter emerged with the ball, the big 8 charging down the 10 channel saw fly half Jordan ‘pinky’ Pincombe make a decent hit and allowed them to set play. The ball was spun out but big pressure from centres Scott ‘eel’ Pedley and Josh Humphreys saw the 13 knock on and give Cannock back possession.
Line out, John TB Shirley with the direct arrows to Skipper Gareth ‘obi’ Ley allowed a steady maul to form, a steady march up the pitch and the ball was out to unleash the backs. Uttoxeter struggling to stay onside and the ref blows for a penalty, quick thinking by Scott Lathe, taps and goes gains a few yards gives a neat offload to Skipper Ley who charged through two tackles one man left to beat the infamous obi show and go came out and he raced to the line to set Cannock on their way.

Wise words from fly half Pincombe at the restart. “The game is too open close the gaps and make it difficult”. This fell somewhat on deaf ears and Uttoxeter bombarded Cannock with attack after attack. To the credit of Alex Freeman and Larry some big defence out wide stopped an immediate response. Uttoxeter now comfortably camped in the Cannock 22 where applying big pressure. Cannock fronted up with Stephan Frost leading the way with three back to back tackles supported by Sonny, Viggo and Dorian; soccer and joe sniffing around for the jackal as always. Left to right and a mistimed drift defence saw the Uttoxeter back go under the sticks.

Skipper Obi Ley took a knock in the solid defence which allowed the inform Daniel ‘Tank’ Blake to make an appearance. Another solid Cannock scrum held strong by Viggo, JTB and Dorian allowed front foot ball. Soccer John linking up with scrum half Conor Gladstone unleashed Pincombe who made a couple of yards and set Eel on a crash ball, well read by the Uttoxeter defence who teamed up on him. The ball came loose and Uttoxeter cleared all the way to the impressive Debut Dave Edwards, with Uttoxeter defence creeping up on him he stepped one and used the incoming Larry who went charging down the pitch, somehow Conor managed to keep up with him and recycled quick ball. Pinky broke through two tackles and looked as though he was coasting to the line, a rapid recovery from the Uttoxeter 11 caught pinky on the 5. Support arrived in numbers and pinky had the awareness to pop off the floor to the incoming Daniel Blake who went over for his second try in as many games.

Converted. Scott Pedley
7-14.
The game seemed to settle somewhat with both sides enjoying bits of possession. Big tackles in the middle of the park seemed to stop any real momentum being built. No space through the middle the Uttoxeter fly half tried a kick chase but somehow fell over Sonny’s trailing leg. Accident or purpose? No gap to find for full back Debut Dave so he decided to play kick tennis with the opposition full back. Good defence from Eel snuffed out the hot stepper after he made 30 yards. Uttoxeter tried to go wide and ended up being dragged into touch by Dorian and duly helped by 3 other of the Cannock entourage. A good steal in the air from Uttoxeter meant Cannock’s defence was on the back foot quick hand out wide and a poor drift and poor tackling saw the winger evade 3 players and go under the sticks.

Jordan got the 2nd half underway with a big restart. Soccer trying desperately to get his hands on it after coming close 3 times previous. Success! It went straight into the arms of Viggo who boshed it up. Back into the hands of Soccer who saw the space in behind and tried a chip chase. Unfortunately hitting Daniel Blake on the way up. Scrum Uttoxeter. The Cannock pack had been working the Uttoxeter boys hard but they held their own getting the ball out to the 10 who let the hot stepper 15 in. A big dog leg in the midfield allowed him to find space and gaps and swan dive down in the corner.

Some sloppy work at the break down following the restart saw Cannock gift Uttoxeter an easy 3 points from the tee.

An immediate response was needed and came with the backs executing a move they have worked hard on in training. Slick hands saw eel make a break who offloaded to Josh who made some hard yards before giving it back inside for Pinky to dot down under the posts.???? No try. The ref had been involved in an accidental collision with an Uttoxeter player and disallowed the try because players had not ensured his safety. Make your own mind up. Credit must be given to the Uttoxeter captain who tried to plead with the referee on Cannock’s behalf but to no avail. Free kick to Uttoxeter. The captain asked his kicker to give us back possession by form of a line out. Classy!!
The line out was secured and pressure from Cannock began to build. Some Illegal interference from the Uttoxeter pack allowed Cannock to opt for the scrum which they had been dominating all game. Scrum on the 5m was collapsed by Uttoxeter. Yellow card.

10 minutes of an extra man, surely Cannock could take a lead and put the tie back in the away teams favour? Cannock continued to dominate the scrums and defensively looked pretty sound. Cannock again found themselves in Uttoxeter half and applied pressure. The referee called sealing off penalty against Cannock, questioned by Skipper Ley referee marched Cannock 10. Frustrations starting to build amongst the Cannock pack still feeling aggrieved that a perfectly worked try was disallowed. Frustrations would continue to build as the 14 men of Uttoxeter extended their lead a show and go from the fly half let the hot stepping 15 through again and under the sticks.

29-21.
8 points behind 13 minutes to go. Cannock needed something big to turn this around. Uttoxeter defence was solid and crash balls wasn’t working from the backs. Forwards continued to apply pressure and tried to break through, big pick and goes and quick recycle ball kept the momentum going for Cannock. The impressive Conor fed the backs it came to Humphreys who chipped and chased over the top. The Full back must have sensed the charge from Larrrrrrry and fumbled the ball on the try line. In-between Larry trying to kill the full back in the tackle and pick up and dot down there may have been a slight knock on from Larry which wasn’t detected from the referee. Humphreys gathered the loose ball and dotted down. Some justice from the earlier disallowed try availed.

Not long to go and Uttoxeter back to full strength the game was closely poised for the final 5 minutes. No let up from Cannock as they went on search for the winning points. A penalty on the halfway line was awarded to Cannock surely points was the call on a small pitch. No Skipper Ley called for a kick to the corner. A brave call with Uttoxeter 2nd row stealing 3 of the last 4 line outs. Line out secure, MAUL. Big yards made by the Cannock pack. Offside called from the referee Cannock penalty. Inside the 22 surely Ley calls for the posts. No! Scrum called relentless pressure from the forwards saw the home team being marched backwards towards their own line, 5 metres out Uttoxeter only going backwards leaves the referee no choice but to award the penalty try.

Final few minutes of the game still left time for the inform Humphreys to score his second of the match and put the game beyond Uttoxeter. Carries from Joe Brookes and Stephen Frost and Little Dave meant Uttoxeter had to throw two men to every tackle and leaving space out wide. Humphreys screaming for the ball with Sonny outside of him and Alex Freeman outside of him surely a try if the ball came out. Conor finally found his way back to his position after some good rucking gave Humphreys the ball. He broke the line and fed Sonny who passed back inside to Josh. Uttoxeter knocked the ball forward but was picked up by Frosty. Brought down 10m out he popped to Humphreys who dotted down in the corner.