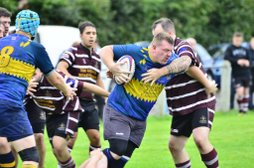 Cannock welcomed Newcastle Staffs in the Cup this weekend to the Morgan ground. Newcastle were hoping to gain some revenge on the lions from last season, as Cannock didn't give them an easy ride to promotion by narrowly beating them 24 -22.

Cannock knew it was going to be a tough day in the office, but with the commitment and persistence on Monday’s and Wednesday nights we were hoping it was going to pay off in this cup game. Still within our early days of our season with new coach Halil and new team structure it was a great opportunity for individuals to prove why they should be wearing the 1st team shirt.

Cannock started the game in full throttle with good tackles coming in from Frosty, Soccer and Baughy keeping the home team from breaking the gain line. Cannock trying to work on new calls and new backs moves but was struggling to get any momentum going, and found themselves on the back foot and defending for the first 15-20mins. Credit to the back row of Newcastle, they had strong runners and new were to attack Cannock. It wasn't long before the number 8 picked up from the back of the scrum put his head down and broke 3 tackles to run under the post and score the first try of the game.

Scott Pedley back in the number 10 shirt this season, restarted the game a good challenge from Soccer made Newcastle fumble the ball and Cannock were in possession of the ball. Lathe, Barrett and Jim the fist made a few yards with quick hands coming from Murph to unleash the backs. Josh carried hard and offloaded to Ley who tried to go through the gap but was denied but his opposite number. Referee blew the whistle for an earlier infringement on a Cannock player, it should of been an easy 3 points however excitement shall we say got the better of us and a quick tap and go was in motion only to be turned over.

Newcastle cleared there lines and a lineout was called. Lineouts were frustrating for both sides as both couldn’t consistently keep hold of their own ball with both intercepting each other’s. Cannock did well to disrupt so many lineouts but have plenty to work on for their own. Newcastle were in full flow again using their quick backs to move the ball around, not much came through the backs defence and good tackles from Jordan allowed Ley to to get a turnover and the penalty was awarded.

Newcastle restarted the game but dropped ball from the Lions allowed Newcastle to gain quick possession and countered the home side. Newcastle had their tales up, from a lineout the ball went wide quickly and back inside to the nifty winger who raced through to score. Cannock really need to tighten the gaps up for next season and this will be worked on.

Second half got under way with Cannock going down the hill, the Lions dusted themselves down after a pep talk from Coach and went back in to gear. Good challenge in the air from Joe Brooke’s and Kris Hampton which allowed Cannock to gain quick possession, and offload to the backs were Josh crashed it up and Murph quickly recycled out to Tank on the wing. Drop ball meant scrum down to Newcastle, a quick scrum from the visitors who shipped it wide only to meet Palmer who put a text book tackle on his opposite number. A few silly errors by Cannock allowed the visitors to extend their lead with a penalty.

Cannock continued to press and hit back from inside their 22, from broken play and good work by the forwards, the ball came out to Eel who beat his first man and puts skipper Ley through the gap and sprints into Newcastle 22 and offloads to Jordan who was tackled off the ball just short of the line, good rucking from Tank, Murph allowed Ley to pick up and drive over for Cannock’s first try.

Cannock made a few changes on the park and moved some players around, Cannock continued to apply the pressure and Newcastle again struggled to deal with the intensity with the fresh legs of Viggo at the breakdown, cracks were starting to appear. The ball went left to right and right to left in very quick succession and the Newcastle back line was struggling to keep up with the pace of Jordan and Humphrey’s who smashed through the middle only for Josh to come off his wing to finish a great try.

A quick re-start from the visitors team saw Cannock once again on the back foot, Tank made a crunching tackle through the middle on his opposite number, but unfortunately Cannock were called back for an earlier infringement where the guest took a quick tap and go while Cannock were caught sleeping and the visitors scored.

Training has gone to a new level this year with the club and new coaches, it is improving every week and we are showing it on the pitch, numbers are good but can be better!! Senior training is every Monday & Wednesday from 19:00pm at the club.

Well done to Jordan Pincombe for his MOM performance, great start to the season matey.