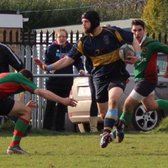 The Ying to the Yang of the 1st team Second Row Partnership ( Props ask one of the backs what that means). Cannock's own bearded hipster .....

How old were you when you started playing: 29

What do you like most about match days: The atmosphere before game time and the build up. The game and the feeling of victory after.

Favourite memory/moment to date: Personal the birth of my kids and getting married. Sporting winning the Owen cup and getting promoted after our hard work

Worst memory/moment to date: Losing in the Owen cup

Most committed: Would have to be soccer jon , his work on and off the field can never be questioned

Hardest to tackle: There are a few slippery little bastards. But jord would have to be up there quick feet and great side step. But for sheer size lump and little Dave can be difficult to get to ground

Biggest moaner: This could be a long list but would be eel and bullet at the top

Hardest: There are a lot of hard men in this squad but would never want to be on the wrong side of john the bastard nickname well deserved

Best player you have played with: Couldn't pick just one or two it would be the first team pack!

And finally.... Who's the longest in the shower: depends what you mean.. Baughy takes his time. But josh/eel for the other meaning