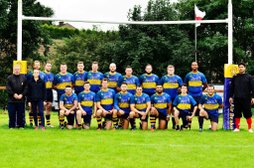 Avengers Assemble For Victory over Neighbours

The avengers reassembled this week for the short journey to league rivals Willenhall RFC. With the weather deemed to play a major factor in proceedings the warm up was sharp with plenty of handling to get used to the wet ball.
Playing down the slope and receiving the kick off Cannock immediately began the match with intensity and possession, both areas of focus on the training ground. Both sides squared up in the opening exchanges with even territory. It was the home side that struck first with quick hands to the winger after getting good possession in the Cannock 22, The conversion was missed and Cannock knew they had to strike back.
A good chase from the restart from the back row and Willenhall found themselves pegged back in their half. When they did clear their lines excellent carries from Darren (Thor) Baugh and Joe (Ironman) Brooke’s left wannabe tacklers in their wake. Quick off loads to the supporting Freeman and Stephen (Captain Wales) Frost put Cannock in kicking range after Willenhall desperation at the ruck gave away a penalty. Penalty missed by the, until that moment 100% for the season foot of the day Pincombe, was this to be the pattern of the day? Not so, after receiving back possession more penalties from the Homeside and quick tap and go from Skipper, Gareth Ley nearly put Mark Davis over the line but was held up. However due to poor discipline from the home team Cannock was awarded another penalty, a quick tap from James Murphy gave the forwards front foot ball and Darren Baugh dually accepted to drive over the line from 15 metres out and score. Converted by Pincombe, that was more like it.
Cannock received the ball back and made easy yards through the backs Josh Humphries, Gareth Ley and the nimble Pincombe, cutting through and finding that support was always close. Cannock moved the opposition pack around and with excellent touch finding from Scott Pedley .Cannock looked to be on top. It was a kick under pressure from the Willenhall ten that found the 5m line and put Cannock under pressure on their own throw in. A perfect through from hooker James Cummins unfortunately found the hands of the opposition number eight and Willenhall drove over for the unlikely score. After a missed conversion the half ended 12-10, all to play for.

The half time talk was “more of the same lads”, “move the ball through to their centre channels” and “up the intensity in defence” no more words needed as Cannock kicked off the second half.
Straight to work, and Cannock intensity led to a series of Willenhall errors. Scrum time led to pick and goes from Freeman and support lines from his fellow back row, More infringements at the break downs and offside in defence tested the referees patience and he eventually reach for a yellow card after Cannock were denied two scoring opportunities right on the line. It was only a question of when and Freeman answered it with a trademark carry and drive over the line. Converted 17-12.

The story of the next 20 minutes was the same. Cannock intensity, Willenhall mistakes and Pincombe slotting two more penalties to put the lions 23-12 ahead.
For anyone with cruise control, you know you cannot use it for to long round these parts and a couple of touch and go decision from the pretty faultless official gave the home side momentum back. The referee was quick to reach for a yellow as the penalties continued and it was the unfortunate Mark Davis in the back row who took one for the team. This gave Willenhall a surge and for the 10 minutes with the sin-bin, Cannock defence was tested to the limit. Last ditch tackles from wingers Alex Turner and Dan Clark optimised the lions effort. Eventually to much pressure led to the winger once again finding space between the touch line and Cannock’s defence. 17-23 unconverted. Cannock knew they would have to hold out for the remaining 5 minutes as Davis came back and went straight to work in the scrums and in defensive tackling. Tackle after tackle made, phase after phase, a monumental effort but a try in the last minute awarded in the corner as the home sides eight had been adjudged to cross the line when only his head had seemed to. 22-23 and a kick to break Cannock hearts. Relief was plain to see as the kick sailed wide and Cannock has come away with a great victory away from home.

Man of the match went to Joe (Ironman) Brooke’s for his tackling, carrying and effort on a day when their were 18 men that deserved it. A special mention to the front row of Viggo Madsen, Scott (The hulk) Lathe, Jim and Jay (Deadpool) Barrett, who held strong under difficult conditions .

The avengers assemble on Monday night for fitness training but as of Tuesday 11th October training will move to Tuesday and Thursday nights.