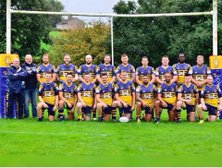 Cannock, today were looking to put some wrongs to right. A tough couple of home games has left Cannock still trying to find a home win, however a flawless away streak was to continue in Eccleshall.

The first encounters were a tight affair. Midfield collisions and strong defence from both sides kept the scores at nil. Cannock missing a few players for the clash today, but the 15 who walked on to the park definitely put their all in to it. Skipper Gareth Ley stepping in at 10 today started off strong and offloaded to Josh Humphreys who carried hard in the Eccleshall players breaking tackles but getting snagged in the 22.

The home side worked back up the pitch. It was evident that they were up for a battle today and were going to give Cannock a hard day. Scrums were a big part of the day and there were plenty of them. With a monster of a front row, Craig Lump Richards, Mark Davies and Jay Barrett all put solid performances and our scrums held strong. A good pick up from Halil Gozukckuk seen him take on 2 players only to spill the ball and knock it on, this was to become the story of the day.

Scrum down to Eccleshall, good distribution from there 8 to their 9 saw the ball go out wide and allow Eccleshall to turn on the gas and run down the wing and score in to the corner. Poor tackling from Cannock allowed a soft try. Conversion missed

Cannock restarted the game and a great chase from Jon Freeman, Kris Hampton and Stephen Frost put the home side under pressure straight away, the home side managed to ship the ball out but only to get tackled but the solid centre partnership Caine Smalling and Humphreys. Penalty awarded to Cannock for poor discipline again from the home team and a quick tap and go by James Murphy charged up the park only to be tackled by the fullback who wasn't 10 yards, yellow card and 10 mins in the bin for him. Post called, normally a straightforward kick but unfortunately was missed by the normally perfect Jordan Pincombe.

22 drop out for the home team, Cannock pack started to assert dominance. Carries from Dave Lovell and Halil allowed Cannock to gain some good ground, but once again an offload that didn't need to happen when spilling forward and Cannock lost possession. Scrum down again to the home team, quick ball straight out to their backs but good tackles coming in from Daniel Blake to stop the attack. Unfortunately the tackle was illegal and the home team had a penalty, line out called and and a good take from their jumper saw them marching up the park towards our try line. Outstanding defence by Soccer and all forwards to stop the drive and turnover ball was called.

Quick Scrum and Ley cleared Cannock's lines and a good chase from Josh, Caine and Palmer piled on the pressure and turnover ball. Cannock spread the ball out wide and attacked the wing, another penalty awarded to Cannock and a quick tap and go saw the ball go out to the powerful Humphreys who went over the line and scored. Conversion missed

Cannock Restarted the second half, good chase from Brad Stanaway and Kerst Ward put the home team under pressure. Eccleshall shipped the ball out wide only to knock it on again and Scrum down, good solid scrum from Cannock saw Hail pick up at 8 and go and smash in to their number 10. but only to and offload again and spill the ball. The game was becoming frustrating to say the least, multiple knock-ons and silly penalties just didn't allow the game to flow.

Lineout to Eccleshall jut outside the Cannock 22, who set up a good driving maul and continued to carry hard and worked there way in towards the try line, some good hard carries saw their number 8 bundle over for a try, conversation missed.

Cannock were in possession again and quick thinking from James Murphy and Stephen Frost who managed exploit gaps with quick ball, Skipper Ley broke down the left wing and carried to the 22 line and offloaded to palmer who chipped and chased his own kick, good recovery from Eccleshall who cleared their lines. Unfortunately a high tackle on Ley allowed a kickable penalty for Cannock. Now if you don't know Carl Palmer can kick, (he tells us every week) so the kicking duties handed over to Palmer who slotted a great kick to bring the game closer.

Frustratingly Cannock kept losing the ball forward and giving away possession at critical times. 10 mins before the end, a good carry from Halil who offloaded (without knocking it on) to Pincombe who did his famous 60 metre dash with some great footwork, gave a rude hand off to the winger and scored in the corner, great try and great support running from Brad Stanaway. Conversion missed

Final whistle gone and Cannock walk away with another away victory, we didn't make it easy for ourselves but the win is the most important outcome.

Training is on Tuesday and Thursdays at 7pm. Can all players please attend training.

Thank you to all our Sponsors, Wakelake, NMB and DGL