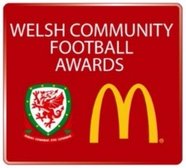 FAW club of the year for WALES!

Morning all,
It's with great pleasure that I can now, after keeping my lips tight for the past two weeks!
Canton Rangers FC are now!
FAW club of the year for WALES!
Last season we were very fortunate to win South Wales club of the year by the FAW, but now recognised by the FAW that this year we were worthy winners for the top award.
We, like many clubs like ourselves who put in many hours of our private time volunteering endlessly daily, weekly for something we love and can give to our local community. It's very encouraging that we have been noticed for all our efforts!
So well done all !!!!!
All the very best
Andrew
FAW link to awards-
http://welshfootballtrust.org.uk/news/WFT104847.ink

Canton Rangers have been a fantastic influence on the local community for the past 16 years however despite this in 2015 the club received the devastating news that the rent for their home, Cantonian High School, was to increase by 60%.

The club therefore had to made the brave decision to leave, putting their members first by ensuring costs were kept as low as possible.

Despite this, ever since Canton's success has grown from strength to strength. Through a continued commitment to inclusive, fun and engaging football for all they have been awarded silver accreditation for the first time and have expanded the club to more than 25 teams, 300 players and 60 volunteers.