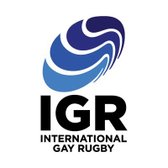 Below is statement in response to the repeated homophobic comments and posts by Israel Folau.

International Gay Rugby (IGR) and the gay rugby community worldwide continues to be disheartened by Israel Folau’s repeated homophobic comments and social media posts.
IGR condemns Israel’s remarks, and supports similar responses by IGR member clubs in Australia and around the world. Israel has the right to express his religious views, but he’s crossing a line by expressing harmful and implicitly hateful material.

Rugby is a game for all shapes and sizes, inclusive and accepting of all, regardless of sexual orientation or gender identity. In many parts of the world, rugby leads the pack in working to get rid sexuality and gender identity discrimination on the sporting field. Israel Folau’s comments, and the tepid responses from Australia’s national and state rugby organisations, are unwinding some of the great progress made in our sport.

In the lead up to the Bingham Cup, the gay rugby world cup, in Sydney in 2014, Rugby AU joined with the AFL, Cricket Australia, FFA and NRL in signing the Anti-Homophobia and Inclusion Framework for Australian Sport. Implementing that commitment later that year, Rugby AU then instituted a comprehensive inclusion policy.

IGR calls on Rugby AU to adhere to the commitments it made in 2014. Rugby has been a leader in promoting inclusion for LGBTI people in Australian sport, and should continue to lead.

Despite advances for LGBTI people in many parts of the world, homophobia continues to harm people. Israel’s comments, and the failure of his employers to meaningfully respond, hurts players and fans in the sport we love, especially people who are grappling with their sexuality: a particularly vulnerable time for some. Being gay, lesbian, bisexual, transgender or intersex must not hold anyone back from getting involved in rugby and enjoying the game, whether at school, club, or elite level.