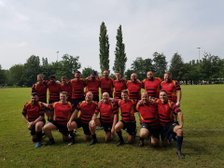 While we may not have sent a full squad to Bingham Cup 2018 - Amsterdam, the 6 players and 7 supporters certainly made an impact both on and off the field. Forming part off the Bulls B team, we provided experience and pace to a relatively junior team. Being drawn in Tier 3 of the competition against Manchester Village Sparatans B, Ottawa Wolves and Lisbon Dark Horses in our initial pool stage.

Day one:
First match up saw us in an all UK clash against Spartans B. The BulLions worked hard and built on the moves leant less than a week before in Cardiff. Final Score Spartans B 0-15 BulLions!

The next match saw us face Bingham Cup 2020 Host City hopefuls Ottawa Wolves. This game was hard-fought and both teams were looking to gain the advantage. On the stroke of half time, the BulLions levelled the match at 5-5, but unfortunately a Wolf got himself in the wrong position and went down injured as he attempted to stop the try. After a prolonged wait to get him up and off the pitch, there was only time for 5 minutes of the second half. The game was well and truly on!
The BulLions wanted to carry on their winning run, while the Wolves wanted to gain the victory for their injured team mate. Every player put it on the line for those 5 minutes and the hard work paid off for the BulLions. Final score BulLions 10 - 5 Wolves. At the time of the report, we hear that the injured player is undergoing physio and recovering well, we wish him a complete and speedy recovery.

Day two:
Our final pool match saw us face Lisbon Dark Horses, a European Powerhouse on the IGR circuit, they were also undefeated going into the match so the position of pool winners was at stake. Unfortunately, despite the amazing performances put in by all, the Dark Horses were victorious with the final score being Dark Horses 31 - 15 BulLions.

Following the pool stages, we faced the Southern Hemisphere Barbarians; a team of New Zealand Falcons and Sydney Convicts. There was a lot of experience in their team, and despite the final score, the BulLions had the upper hand in the scrum and for the first half. Final score SH Barbarians 17 - 7 BulLions.

Day three:
Our Challenger Plate semi-final saw us face a familiar foe in the form of Wessex Wyverns RFC. Having played them several times over the past few seasons we knew what faced us. The injury list for both teams was growing but everyone dug deep and pulled out the victory that saw us into the FINAL! Final score Wyverns 0 - 10 BulLions.

The Challenger Plate Final fast approached and saw us face Straffe Ketten RFC from Brussels. Due to injuries sustained by SK, the match started uncontested scrums. It was closely contested in open play with both clubs wanting to bring some silverware home. The final score Straffe Ketten 0 - 15 BulLions!

Following the presentation of the trophy, we rushed back to support the Bulls A team who were also victorious in their final. Overall approx. 30% of all trophies presented at Bingham Cup 2018 returned to the UK, an amazing achievement from all clubs involved.