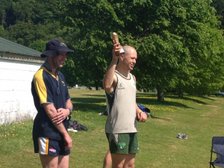 The first Wales Touch Series was held in Llandysul on 8th June 2013.
The sun was shining, and it was looking to be a great day for the tournament. Three teams entered; Cardiff Raptors, Gorllewyn Gwyllt, and Phoenix. Each team played each other twice, with the overall winner to be decided on points accumulated throughout the day.

First up the Raptors played Gorllewyn Gwyllt. They made a good start to the day with a strong defence and loud communication. Scores came from Mark Knight (2), Nina Worgan, Sophie Twinam (2), Paul Betts, Sarah Barrett, Dave Bish and Gareth Revell. Final score was 9-1.

Next Raptors took on fellow Cardiff team, Phoenix. This was a more closely fought match with the first 2 scores coming from Twinam and Revell before Phoenix got one back. Debutant for the Raptors, Adam Lopez then got the next score, followed by a Phoenix touch down. The game continued in this fashion with scores from Lopez again, Revell and Twinam. Final score Raptors 6 – 4 Phoenix.

After the break for lunch, Raptors played Gorllewyn Gwyllt for the second time with scores from Emily Baird, Lopez (2) , Twinam, Barrett, Nina Worgan and a hat trick from Ciaran Monaghan. Final score 9-3.

Final match of the day was again against Phoenix. This was the highest scoring match of the day. The first half ended 5-5 with scores from Revell, Monaghan, Baird, Sophie Lewis and Katie O’Neill, with Phoenix leading for most of the half.
The second half saw scores from Lopez, Martyn Seymour, Revell (2) and Nina Worgan. The Raptors finished the game 10-8 up to complete their run of wins for the day, therefore winning the tournament.

Thank you to the Referees – Kevin Hobbs, Clive Thomas, Rolfe Hare, Allesandro and Fabio. Congratulations to Sophie Wilkinson of Phoenix who was upgraded to a Level 1 referee.

Thank you also to Matt Adams for organising the fantastic venue.

MVP’s for the Raptors went to Paul Betts and Sarah Barrett.

The Raptors are looking forward to the second WTS in Swansea on July 20th!