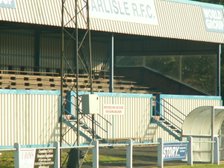 Our first match was a home game against our near neighbours from across the border at Langholm Rugby Football Club. In the early years a variety of pitches were “home” before the Club moved to its present ground in 1895. Players did regularly gain County Honours and in those early years we produced three England internationals, C.E.Chapman (1884), W.M.B.Nanson (1920), and J.R.Morgan (1920). However, only once in 1908, did the club raise the County Cup. It was to be 1961 before we got our hands on the silverware again, due in part to the decision not to enter the competition between the Wars. After World War I the Warwick Road ground saw another first when it hosted the first ever sevens tournament to be played in England, the venue no doubt influenced by our proximity to the Border clubs. Carlisle beat Hawick 7 – 6 in the final. In 1923 the club’s first grandstand was erected.

As with all clubs it was a struggle to keep going during WW 2, but the years after were characterised by significant development of the club facilities. The 1950’s saw a huge fundraising effort, which included five floodlit games on Brunton Park, the home of Carlisle Utd. AFC, between sides representing the North of England and the South of Scotland. These were, according to records, the first floodlit rugby matches to be played in this country. The result of all this fund raising was the building of the present clubhouse, opened in October 1959. Less grand but just as practically important was the opening of new changing rooms, replacing 50 year old timber chalets.

This effort was rewarded in the 1960’s with arguably Carlisle’s finest sides. The Cumberland Cup winning side of 1961 included Alan Briggs, who set a club try scoring record that season of 43, and five players who between them won 59 caps for the County; Graham Johnstone, Les Steel, David Burnett, and twin brothers Alan and John Tiffen. The side of 1967 – 68 produced the best ever record of played 40, won 33, drawn 3 and lost 4. Graham Evans broke the clubs’ record points for a season, amassing 267 of their 687 total, only two less points than the opposition total. Carlisle were among the most feared of opposition in the Northern Counties and it appeared for a time as if the club might break through to the upper echelons of English rugby.

That side also included two of Carlisle’s finest players. Wing forward David Robinson played 39 times for the County and along with Chris Wardlow was in the victorious North West side that beat the touring All Blacks at Workington on a memorable November afternoon in 1972. Chris was a hard running centre and fierce tackler. He played for England against the Home Countries from 1969 to 1971 and was picked for the sensational 1971 British Lions tour of New Zealand but had to withdraw after breaking his jaw in a pre tour club match for Northampton. 1971 was also the year when the changing facilities were constructed and this was followed in 1974 by the erection of floodlights on the main pitch.

Lion’s tour withdrawal was a fate that befell another former Carlisle star. Ian Hunter who had two seasons in our senior side. In the late 1980’s before, like Wardlow, moving on to Northampton and winning England honours. Selected for the 1993 Lions tour, also to New Zealand, his experience was cruelly cut short by a dislocated shoulder in the first tour match. Ian had been part of the Carlisle side that had seen an improvement in the clubs fortunes. During the 1970’s the status of the club had fallen from the dizzy heights of the late 1960’s. Much of this fall was due to the decline of rugby being played in schools and in the consequent lack of players coming trough and led to the establishment of a Colt XV in the late 1970’s. By the mid 1980’s the success of this policy was beginning to make itself evident.

We entered the 21st century with one of the strongest youth sections in the Northern Counties. 1994 saw the establishment of a ladies side and they took the name ‘Cougars’ formerly the title of the fourth XV. The 2nd XV have been a highly competitive outfit and Cumbria Shield League Division 1 winners in 1998 – 1999, 2000 – 2001 and 2001 – 2002 and then for the following three seasons they competed in the Scottish Border Junior League. 2007 – 2008 in their third season now saw them in the ‘Candy’ League, deriving its title from Cumbria, Northumberland, Durham and Yorkshire – as clubs from those counties enter their second strings in the league.

The 2004 – 2005 season will no doubt be remembered as a landmark season for the club. In January 2005 the ‘Great Carlisle Flood’ devastated the club premises with the clubhouse being under a minimum of six feet of water. With everything ruined, homeless, no equipment or kit, we led a nomadic existence for the remainder of the season.

The senior side played most of their home games at Langholm, and with a couple at Wigton. The other sides were kindly accommodated by near neighbours at Creighton, and Penrith and elsewhere. However, thanks to the magnificent efforts of our recovery committee we returned to a rebuilt and refurbished clubhouse and new changing rooms in July of 2005 – a feat thought almost as impossible as the promotion of the 1st XV at the end of the following season. October 2007 saw the re-opening of the grandstand after a much needed renovation programme. Facilities at Warwick Road are now up to very modern standards and the club now looks forward to sustained success on the field to project the image of the game in this proud Border City.

Carlisle 1st XV were promoted at the end of the 2005–2006 season from the North Lancs & Cumbria League, they spent the following term in North 2 West and finished in a creditable 5th place. The following season a level transfer meant they were in North 2 East, but aft