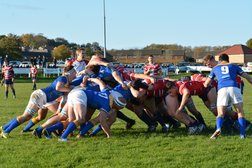 A chance to blow away the cobwebs

Carlisle had their first preseason game against a well drilled Alnwick side, losing 24-0.

Alnwick clearly benefited from their previous 3 games, whilst Carlisle were blowing away a few cobwebs from an 18month layoff. Lots of endeavour and decent individual performances, especially from the new faces, many having their first game of senior rugby.

Despite the scoreline, Carlisle had chances to get on the scoreboard, not least when they had a 5 on 2, with our second row suffering from white line fever 2m out.

The coaches will have taken lots of positives away from the match, along with things to work on during training in the next couple of weeks, before the season starts, at home against Kendal on the 4th September.