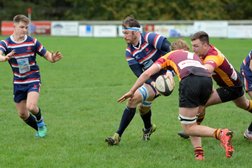 Carlisle lose nailbiter in the Isle of Man

A single point was all the difference between these two sides on paper, yet Carlisle will rue missed chances to put this game to bed much earlier.

Carlisle started well enough and a break by loosehead Kiamid Ghanbari in the first few minutes should have been rewarded with points but the offload a few metres shy of the line didn't go to hand, and Douglas were able to clear their lines. The home side managed to gain some territory through a penalty but stout defence by the Carlisle side kept them away from any try scoring opportunities and Carlisle eventually recovered the ball and built possession and territory back up the field.

They were rewarded nearly 15 minutes in, when a quick tap penalty by fly half James Telford allowed them to camp on the Douglas line. Though a bullocking run by second row Jack Freshwater was just held up by the posts, the ball was quickly recycled out right with a lovely floated ball by Telford over the Manxman's defence, for flanker Matty Little to go over in the corner.

Carlisle nearly had a second a few minutes later as Douglas were put under pressure from a kick deep into their territory from fullback Max Connon. They failed to clear it effectively and Connon and winger Ed Harper combined down the right touchline, to get within inches of the tryline, Connon being held up by a posse of Douglas defenders.

Carlisle were keeping Douglas inside their 22, their only recourse being to kick it downfield to relieve the pressure. However Connon's boot was accurate enough to keep them pinged back in their 22, whilst Carlisle waited for them to make a mistake. That came half way through the half, as Winger Andy Glendinning kicked a ball deep into the Douglas dead ball zone. The Douglas fullback was caught in two minds and Glendinning wrapped him up before he could get the ball away effectively. With a ruck being formed over the touchline, quick thinking by winger Ollie Barker , who saw the ball emerge from the back of the ruck and dived on it before any of the Douglas players could react, secured Carlisle's second try, converted by Telford.

Carlisle continued to keep pressure on the Douglas defence, and enjoyed much of the possession and territory without being able to convert that into further points.

Douglas's sole score in the half came from a 40m penalty slotted by their fly half, clearly used to the wind at Port-E-Chee, which by now was gusting considerably.

Just before half time Douglas had the chance of another 3 points from a long range penalty, but the kick drifted wide.
Bizarrely as the referee turned to go back to the half way line, he collapsed, having injured his calf muscle, and was unable to continue.
Faced with the possibility of abandoning the match and Carlisle having to return to the Isle of Man, after much discussion the two captains agreed to use the referee who had been officiating the previous second XV match.

With the strengthening wind at their backs in the second half, Douglas were able to keep Carlisle pinned back into their half with long range kicks, and were starting to build much more possession than they'd enjoyed in the first half. Another long range penalty from 40m cut the deficit to six points and at 12-6, was much closer than it really should have been.
Carlisle continued to strike deep into Douglas territory and on a couple of occasions were agonisingly close to the try line, before the ball was stripped or knocked on.

The penalty count was beginning to creep up for Carlisle in contrast to the first half, and with only their second real foray into the Carlisle half, Douglas set up a ruck just outside the Carlisle 22. The ball was fed back to their fly half who dummied two Carlisle defenders and sped through the gap between them to go over for a converted try, gaving them a one point lead at 12-13.

Five minutes later with just 10minutes to go, after a lot of effort by the Carlisle side inside the Douglas 22, Douglas committed a penalty at the breakdown in front of the posts to give Jason Israel the easiest of chances to regain the lead to 15-13.

Another couple of penalties would cost Carlisle dear. The first for getting isolated allowed the Douglas fly half a 45m kick at goal, which cannoned off the upright. Although cleared, the Douglas forwards were able to recycle the ball from the lineout and only desperate defence by Carlisle stopped a rejuvenated Douglas side going over. A knock on by the home side in front of the posts 5m out, gave Carlisle the chance to reset, but Douglas won a penalty as the scrum collapsed, giving their fly half the easiest kick of the day to regain the lead at 15-16 with just a couple of minutes to go.

As Carlisle built phases, down the left hand side, a penalty at the ruck by Douglas gave Israel a 35m chance of 3 points, but the wind just took it across the posts, and Douglas cleared the ball back down the field. Carlisle continued to build phases, and again as they forged down the left, another penalty, this time wide out left on the 22m, gave Israel a chance, but again the ball drifted wide in the gusting wind, and just beyond the despairing reach of Lewis Barwise's fingertips as he tried to drop on it in the dead ball zone to secure a last gasp try.

The ball went dead, the whistle blew for full time, and Carlisle were left with a solitary losing bonus, and to reflect on missed opportunities.
They had plenty of possession and territory, and just that last pass, or a stripped ball in the tackle, was the difference between the loss and a good win on the road. There was no lack of effort, and a lot of patient phase play built hard won territory. They just couldn't convert that possession into points when it mattered, with Douglas making it very difficult for them to cross the try line.