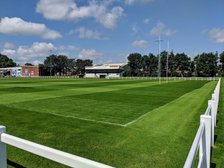 Carlisle were made to work hard for their first win of the season, but eventually overcame the visitors with a bonus point win.

Good defence by Carlisle soaked up a lot of early probing by Altrincham Kersal in the opening exchanges. It was the home side who got points on the board though from their first foray into the visitors half, Jason Israel slotting an easy penalty for an infringement at the breakdown by the visitors. Just a few moments later he did the same again as the visitors gifted him another chance in front of the posts to extend the lead to 6 points.
The visitors struck back though as a lineout catch and drive, which they executed well throughout the game, gave them the first try of the game.
They then took the lead 5 minutes later as they exploited gaps in the covering defence to go over on the right, their kicker expertly converting as he did all day.
There was no panic from Carlisle, moving through the phases, gradually gaining territory until Angus Fulton took a crash ball through to the right of the uprights for Carlisle's first try, converted by Israel.
Carlisle continued to put pressure on the visitors defence, and after one too many penalties in the red zone and a warning from the referee, the visitors were reduced to 14 men for the rest of the half. Carlisle immediately exploited the numbers to score their second, Josh Holmes powering through a bunch of defenders across the try line, just before halftime.
A good half from Carlisle and worth their 6 point lead, going into the second half 20-14 up.
A lot of endeavour by both sides in the opening exchanges of the second half came to nothing for either side. It was Carlisle, who had turned up the screw on the visitors defence, who scored next, Israel powering over for their third, which he converted himself.

Carlisle had only just got used to being 2 scores up, when a kick out of defence by the visitors and an awkwardly bouncing ball caught out the two Carlisle defenders, which was pounced on by the visitors to hack the ball through and score a breakaway try. Carlisle then just lost focus for a few minutes and Altrincham Kersal exploited this, scoring another try under the posts to take the lead and a bonus point.
The game then swung back and forth between the two sides, with Captain Chris Auld scoring to take the lead, only for the visitors to regain it a few minutes later, with less than 10minutes to go.
There was no panic from Carlisle and they gradually built phases together, gaining territory until some good hands across the back line put Fulton in at the corner only for the ball to slip out of his hands before grounding.
Undaunted Carlisle rebuilt and some hard running by Ghanbari,Holmes and Fulton punched holes in a tiring visitors defence, until some great interplay by a number of players put flanker Tom Percival through to dive over under the posts.
It only remained for Carlisle to close out the game for the last few minutes, which they did comfortably for the bonus point win.
An entertaining game of rugby to watch with both sides committed to running the ball when they could.
The difference between this performance and last week's was principally in the penalty count, which was far lower, and no cards. Keeping 15 men on the pitch makes such a big difference and the visitors will rue having had 2 yellow cards, both of which cost them points.

Another weeks training also helped and signs that having a lot of players at training is helping to build and cement processes across the sides.
Still plenty to work on, but Coach Matt Shields was pleased with the performance today, and the improvements generally in the playing squad, with the Crusaders putting in a good performance the previous evening.

Next week we head to Firwood Waterloo for our first away game of the season, and confidence in getting a result there will have been boosted by today's performance.