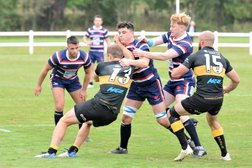 It was a baptism of fire for the 6 debutees as Carlisle were overpowered by the experienced heads of Kendal.
We welcomed Lloyd Clark, Lewis Barwise, Vinnie Lung, Jonny Park, Nathan Greenhow and Kiamid Ghanbari to the first team squad but they'll have to wait for their first win, as Kendal eventually ran away with all the points.

With just 2 minutes on the clock, early Kendal pressure down the right, sucked in the Carlisle defence, giving former Carlisle fly half Glen Weightman an open invitation to throw the ball wide, the Kendal winger going over for the first score in the left corner.

Carlisle were keen to strike back as quickly as possible, and gaining territory down the middle of the park, a Kendal infringement allowed Jason Israel a chance of 3 points from 40 yards, the ball only narrowly missing the upright. Carlisle continued to probe the Kendal defence and set up a maul down the left touchline from a lineout. Unfortunately Josh Holmes was caught isolated with the ball, and Weightman made significant territory from the resulting penalty. A further penalty allowed Weightman to give the visitors further territorial advantage, which they exploited with a try under the posts.
Carlisle then had to endure two forced substitutions for injury and a yellow card to Matt Shields, which significantly disrupted things for a bit, but though things got feisty for a few minutes, there were no further incursions across the try line and Carlisle went into half-time 12 points down.

Carlisle made a bright start to the second half and were soon trying to exploit gaps in the Kendal defence. However an intercepted pass on the Kendal 22m, allowed their centre to run the length of the field for an easy 7 points, leaving Carlisle with no reward for their efforts. When Kendal secure their bonus point after 50minutes, and second row James Brocket was carded for side entry into a ruck, the home side faced a mountain to climb to get anything out of the game. Another interception try pretty much killed the game off for Carlisle. Although winger Ed Harper managed to get points on the board, Israel converting, energy levels had dropped, and Kendal boosted their points total with another two soft tries at the end of the game.

There was a lot of honest individual endeavour from the Carlisle side, but Kendal have clearly bought in a lot of experience, and were well deserved winners. They will certainly be pushing hard for a top 4 spot this season.
The penalty count got the better of Carlisle, and you simply can't allow a player of Weightman's quality the opportunity to pin you back in your own 22. Playing 20 minutes with 14 men also doesn't help.
So things to work on for Matt Shield's players on the training field this week, but no cause for alarm yet so early in the season. With this being only the second full match played since Wirral in March 2020, we should expect that players will take time to get back into full match fitness and game awareness, especially with a lot of new faces in the side to gel together.

It was great however to see so many people back at Warwick Road, and it was clear they were going to enjoy themselves, whatever the match result. We hope to see you again next week as we entertain Altrincham Kersal at home.