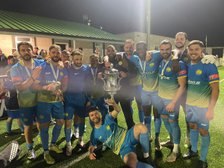 A 12th minute goal from Tyler Blake was enough to secure the Notts Senior Cup for Carlton Town as they beat Mansfield Town U23s 1-0 at Basford Utd.

Blake was credited with the winning goal albeit it looked as if Cody Collins had headed a delightful Nat Watson cross into his own net after fine build-up play by Jared Holmes and Khyle Sargent.

In truth, the Milers won't care a jot. They more than matched their full-time opponents in a close first half where both sides created good chances.

In the second half the young Stags upped their game and forced Carlton to defend for long periods. But a superb effort from the whole team coupled with some outstanding saves from Shaun Rowley, including a full length dive to deny Jaden Charles in the fourth minute of added time, was enough to see the Millers pick up their fourth Senior Cup in eight completed seasons.

A full report will be on site tonight.