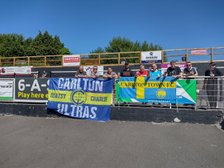 The Martyrs went on to win a penalty shoot out 5-4 and gain some revenge for Carlton's win in the reverse fixture 12 months ago.

In baking hot conditions and in front of an excellent attendance including a dozen or so travelling supporters it was the home side who started the sharper and were on top for the opening 30 minutes.

Mikey Emery made one superb early save, tipping a close range shot from Curtis Jemmett-Hutson onto the bar. But the striker made no mistake on 19 minutes when he converted a penalty awarded for a foul on a triallist.

Shortly afterwards Emery made another top draw save from the same player after an excellent run and cross by Frazer Thomas.

Carlton's first effort came on 32 minutes when Nat Watson set up Brad Wells but his shot was well saved by Jaimie Cogman in the Merthyr goal.

The home side thought they'd doubled their lead on 36 minutes but the strike was ruled out for offside.

Carlton took full advantage and levelled three minutes before the break. A lovely move saw a Martin Ball flick superbly controlled by Alex Howes on the right. He took the ball to just outside the area and then rifled a shot into the corner of the net to the delight of the visiting support.

The Millers were much more in control of the game in the second half with some fine pass and move football. Howes drew another good save from Cogman and the keeper saved with his ankle when Wells looked certain to score after being sent through on goal by Watson.

Jonny White combined with Howes for a late effort that went wide, while at the back the defence prevented Merthyr from causing the problems they had done in the opening half hour.

The game ended in a draw with the home side going on to win the shoot out but it was an excellent work out for both teams and a great afternoon for the supporters.