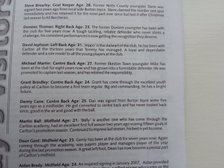 MILLERS LEGENDS GET BEHIND 100 CLUB

Carlton Town Supporters 100 Club now has 85 subscriptions with just 15 numbers remaining ahead of the start this week.

Former players Dominic Thomas and David Jephson, both part of the side which earned promotion to the Northern Premier League in 2007, were amongst those to lend their support to the club over the weekend, along with regular supporters including Roger Galbraith.

We are truly grateful to everyone who has got behind this initiative and to those still yet to confirm their subscription, there is still time. For £10 per month you get to secure the future of the Millers as well as have a chance of winning one of four prizes per month (£100/£50/£25/£25). Here's how to join:

3. When you have done this, email carltontownsc@gmail.com with your name and confirmation that you have set up the standing order. You will then be sent your draw number by return. (If you have a preference for a number between 1-100, let us know. If it hasn't already gone, you can have it. The only numbers remaining at the time of writing are between 71 and 93, and some of those have gone).

4. Look out for the dates of draws on both websites. The aim in normal circumstances will be to have each month's draw in the clubhouse after a home game in the middle of the month. We'll make alternative arrangements out of the football season but will aim to film each draw for Carlton Town TV.

Thanks so much to all of you who have committed to this - it means a huge amount to everyone at the club.

The first draw is on Easter Monday, 13 April. We'll publish a list of numbers before then so you can check and make sure we have your number(s) recorded correctly - there have been emails flying left, right and centre over the last week or so. The draw will be filmed and uploaded to Millers TV. The current lockdown arrangements mean that the first draw will almost certainly be at my house, but if your one hour exercise takes you onto my street and you stay 2m away, please feel free to come and watch!