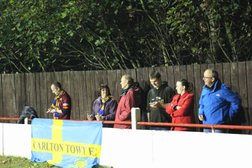 A second half brace from Aaron Hooton rescued a point for Carlton Town in an entertaining 2-2 draw at Lincoln Utd.

The Millers looked out of the game at half time as two poor defensive errors gifted the Whites a two-goal lead and it could have been more as Lincoln controlled most of the first half.

But Carlton improved after the break and will feel that a point was a fair return over the whole game. Indeed, it was the first point the Millers have earned from a losing position this season.

Les McJannet made just one change to the side which beat Kidsgrove, with Alexander Troke returning for the absent Kallum Keane.

Carlton began the better with Josh Rae and Ben Elliott in particular causing problems for the Whites, but it was the home side who took the lead against the run of play on 13 minutes.

There was no danger when Troke, playing at centre-half, played the ball back towards Curtis McDonald. However, the back pass was underhit and Andrew Hutchinson nipped in to round McDonald and stroke the ball home.

Lincoln gained momentum from the goal and looked like a side who had won their previous five games on the spin. Hutchinson fired another effort just over the bar and Kallum Smith drew a fine save from McDonald.

At the other end, Carlton’s best move of the half saw Anton Robinson chest a Martin Ball pass into the path of Hooton who tried an audacious chip over Robert Peet from 40 yards, with the ball dropping just wide of the post.

With the game deep into first half stoppage time a catalogue of errors gifted the Whites their second goal. McDonald tried a quick throw out from goal but threw the ball straight to a Lincoln player. The ball was played into the penalty area, Carlton had two opportunities to clear but when they didn’t, Scott Ruthuen made them pay by firing into the net. Sloppy doesn’t do it justice.

McJannet pushed Troke into midfield in the second half with the formation switching to 3-5-2 and Robinson went close with an early header.

Carlton pushed forward and Rae crossed for Hooton to draw a decent save from Peet. That was just a precursor to Carlton getting a goal back on 63 minutes and what a goal it was. Jamie Walker played the ball into Hooton from the left hand side and the striker turned outside Callum Ward before hitting an unstoppable 25 yarder into the top corner.

Back came Lincoln and Billy Bennett had to clear off the goal line before he and Walker got in each other’s way, presenting a chance to Hutchinson who just missed Smith’s cross at the far post.

With the game entering the final five minutes Carlton got the equaliser their pressure merited. Hooton was fouled 30 yards out, Troke’s free kick into the box was a grass-cutter, but the Lincoln defence kindly stepped aside leaving Hooton all alone six yards out and he made no mistake to the delight of the travelling fans behind the goal.

Hooton almost won the game in added time. Bennett played a lovely ball forward, substitute Maksym Jowal fired at goal and Hooton diverted the ball inches over the crossbar, but a draw was a fair result and that’s how it stayed.