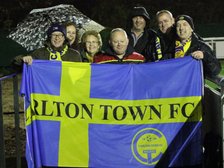 Clee knew a win would send them top of the table and Scott Vernon’s first half header had them ahead at the break but Carlton’s resilience has shone through this season and was there in abundance again. Indeed, although both sides had chances to win the match it was Carlton who finished the game the stronger and might have snatched it at the end.

As it was, the draw meant Carlton extended their month-long stay at the head of the bunch and it also maintained their unbeaten away record. The point also saw the Millers surpass their entire points total for last season just 13 games into the campaign.

Managers Tommy Brookbanks and Mark Harvey made three enforced changes to the side which drew against Glossop last time out. Out went Toby Moore (suspended) plus Tyler Blake and Mamoke Akaunu (both absent). In came Dan Brown, Aaron Opoku and Luke Smithson. Kamani Wilson was also back on the bench after spells at Hucknall and Selston.

Brown slotted in at centre back with Opoku and Smithson combining up front.

Cleethorpes named Brody Robertson, a constant thorn in Carlton’s side in recent years, on the bench following a recent injury.

The playing surface was superb, considering the incessant rain of recent weeks, and as the teams kicked off the heavens opened again and the rain didn’t cease for the whole game.

Clee began the better and Jon Oglesby saw an early effort well saved by Jack Steggles. Vernon then took advantage of a slip by Brown and tried an audacious chip over Steggles but he didn’t get enough purchase and the save was comfortable.

Carlton responded and Oliver Clark was having a particularly impressive game in midfield. He showed some fine control, slipped past two opponents and played the ball to Opoku who in turn fed Smithson, only for Paul Walker to see off the danger.

Despite these moments of possession it was generally the Owls on top in the opening period of the game and Curtis Bateson fired a shot straight at Steggles after a run and cross by Oglesby.

A quick fire move left to right saw Lewis Collins hit a fierce shot which was blocked by a combination of a superb tackle from Daniel Fletcher and a one-handed save from Steggles.

At the other end another bit of excellent play from Clark saw Davie presented with a chance, only for Sam Topliss to block.

Cleethorpes had been playing some nice football, getting the ball wide and trying to get in behind Carlton. They opened the scoring on 28 minutes when the impressive Bateson crossed from the right and found Vernon unmarked at the back post. He duly headed home to the delight of the large home crowd.

Whether the goal caused a response in the Millers or whether the Owls sat back it was hard to tell, but the closing minutes of the first half definitely belonged to Carlton. Steggles found Opoku with a clearance. He held off Walker, ran into the area and had his pick of three Carlton players in front of goal but unfortunately his cross found Tim Lowe who cleared the danger.

Steggles was called upon to make another fine save, this time low down from Collins, before Elliott almost scored directly from a corner. His in-swinger was heading in until Theo Richardson clawed it away from under the crossbar.

The follow-up corner saw Clark head just over as the Millers pressured the Cleethorpes goal in the run up to half time.

Clee had the first chance of the second half when Oglesby fired over the bar from a great position. At the other end Opoku drew another fine save from Richardson after Clark had flicked on a Steggles pass.

The Millers though in general were the better side in the second half. Ball, Brown and Maddison looked very secure at the back with Oliver Robinson and Fletcher dealing effectively with the wide threat. Clark was immense in the middle of midfield and well supported by Elliott and Davie. Smithson and Opoku didn’t stop running to offer a threat when they could.

Carlton were desperately close to levelling on 64 minutes. A wonderful bit of football between Smithson, Elliott, Clark and Opoku saw the latter fire a cross-shot across the face of goal with no one on hand to convert.

The key moments of the game followed. Cleethorpes earned a corner after Steggles tipped a long range cross over the bar. The delivery found Josh Lacey just a couple of yards from goal and his bullet header drew a superb point blank save from Steggles.

It had looked a certain goal and Carlton made full capital of the save by equalising a couple of minutes later. Robinson, once again impressive at full back, played the ball into Elliott on the half way line. Elliott slipped the ball ahead to Davie who took a couple of steps and then unleashed a fierce drive from 30 yards. Richardson got a full hand to the ball but could only watch on as it looped over his head and into the net to the delight of the vocal and very wet travelling support.

Both sides then went for the win. Steggles needed two attempts to save an Alex Flett free kick while Brown made a wonderful tackle at pace to stop Collins going clean through on goal.

Carlton then really pushed forward in the last five minutes. Robinson attacked down the right, found Davie who in turn slipped the ball to Tom Maddison. Maddison moved the ball to the left to substitute Daryl Thomas whose fierce low shot was well saved at his near post by Richardson.

Still there was more to come as Carlton were awarded a free kick 30 yards out on the left. Davie’s delivery was perfect and both Opoku and Clark were unmarked at the back post. Opoku got there first and the ball was slightly too high for him as he headed over. Had he known to leave it Clark would almost certainly have scored.

Seconds later Clark fed Opoku on the right. He held off Lowe and fired at goal, only to be denied again by Richardson low to his left.

As it was there was still time for one more Clee attack and Steggles had to be alert to save a low Collins drive in what were by now extremely damp conditions.

The referee signalled the end of an enthralling game and the players made a point of acknowledging the visiting support. Carlton could be pleased at the way they had responded to Cleethorpes’ goal and the fact they had ended the hosts’ eight game home winning run. The Owls themselves looked a very good side and will be in the mix come the end of the season.