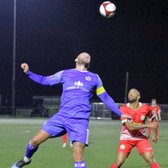 Carlton Town picked up their first point of the season following a goalless draw at Sutton Coldfield Town.

It was a much-improved performance from the Millers, in the second half in particular, and they will feel they should have left the West Midlands with all three points. Nevertheless, a point and a clean sheet were reasonable outcomes in front of another impressive away following.

Carlton welcomed back Aaron Opoku for his first start of the season. He was one of three changes to the side which lost at Spalding with Jacob Sturgess and Joel Daft also coming into the side. Out went Martin Ball, Eli Bako and Patrick Quinn. New striker Jack Gibson was on the bench.

With Ball out, Dan Brown moved to centre half and Sturgess slotted in at right back. Both were to have fine games, as indeed did the whole team.

On the Royals’ artificial surface Sutton had the first opportunities and Jack Steggles made a decent save from an early Reece Leek free kick. Daryll Thomas then did very well to block an effort from Joel Powney.

Carlton responded and Niall Davie, having his best game of the season, cut in from the right but fired over the bar.

Sutton looked dangerous in the opening period and Toby Moore had to be alert to make an excellent block from Edwin Akenhora.

Daft was having a fine game on the left, causing problems for the Royals rearguard, and he should have been awarded a penalty on 25 minutes when he latched onto a loose ball after a Davie shot was deflected away and was brought down by Jake Bloomer. It looked a clear penalty but the referee waved away the claims.

Daft had to go off soon after due to injury following a clash of heads and he was replaced by Sam Whitton.

The Royals had a strong penalty claim of their own turned down before half time when Akenhora went down sandwiched between two Carlton defenders but it was the visitors who finished the half the stronger.

Home captain Ben George almost scored an own goal on 41 minutes when he headed a Davie corner against his own crossbar and two minutes later Sturgess played a ball forward to Thomas, whose clever flick put Opoku through on goal but he just ran out of space to get a shot away.

If the first half had been fairly even, the second was predominantly Carlton pressure. That started straight from the whistle when Opoku ran clear on the left and lifted the ball over Lewis Gwilliams. It looked a certain goal but dropped agonisingly wide of the post.

Opoku then fed Thomas who laid the ball off to Oliver Clark whose shot was blocked.

Whitton then sped down the left before sending over a superb cross which was cleared before having a shot himself but being denied by Gwilliams.

The defence, with Jonathan Mabonga playing just ahead of them, were looking very solid and Opoku’s return to the team was plainly helping as Carlton were keeping possession further up the pitch far more effectively than in previous games.

Thomas was enjoying a fine game and he brushed aside the attentions of James Beresford before fizzing a cross-shot just wide of the post.

Davie then controlled well but shot wide as Carlton looked for the key opening goal.

The Millers’ best chance came on 66 minutes. Davie darted down the right and crossed beautifully to the near post to Thomas. He failed to connect but the ball travelled to Whitton coming in at the far post just six yards from goal an unmarked. He looked certain to score but could only side foot straight to a grateful Gwilliams to the despair of the Millers faithful behind the goal.

The Carlton fans were then joined by some escapees from the local creche who couldn’t help but admire the instrumentation on offer in the absence of the usual Sutton Coldfield trumpet ultra.

As the game entered its final minutes the home side had a great chance to win it but Adam Garmson could only head straight at Steggles when unmarked. Still both sides came forward with Gwilliams doing well to intercept an Opoku cross and Sturgess making an excellent tackle to keep the home side away from goal.

At the final whistle the players once again came over to applaud the healthy midweek travelling support who could have no complaints about the efforts of the team.