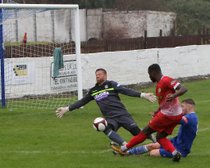 Carlton Town secured their first win of the new campaign with a 3-0 success against 10-man Frickley Athletic.

The home side had goalkeeper Thomas Nicholson sent off on 25 minutes for handling the ball outside his area and that decision undoubtedly affected the final outcome. The Millers were good value for the win but a combination of poor finishing and some good goalkeeping from substitute Gavin Saxby meant the result was in the balance until Aaron Opoku hit Carlton’s second with six minutes remaining.

In rain that didn’t relent for 90 minutes and on a pitch which was consequently very slippy, the Millers made three changes to the side which drew at Sutton Coldfield last time out. Into the side came Martin Ball, Danny Elliott and Sam Whitton. Out went Joel Daft, Jacob Sturgess and Jonathan Mabonga.

The home side featured Nyle Blake, younger brother of Carlton striker Tyler, in their starting line up.

Frickley came into the game on the back of a heavy defeat while Carlton were looking for their first win. As such, the opening goal was always going to be important and the start of the game reflected that, with neither side willing to risk being caught in possession. The result was a scrappy opening quarter of the game.

The Blues had an early chance when Jack Steggles punched a Charles Barks cross to Nathan Hotte who fired over the bar.

Kegan Everington then hit a snap-shot which was well saved by Steggles.

As the half progressed Elliott and Oliver Clark were beginning to impose themselves in midfield and push Frickley back. Elliott found Opoku who played Whitton in on the left. He hit a lovely cross into the area which was begging to be knocked into the net but no-one was there.

The key moment came on 25 minutes. Dan Brown played a delightful ball to send Opoku clear. As he bore down on goal Nicholson scooped the ball away from him but had clearly reached outside his area to do so. The linesman flagged immediately and the referee had no choice but to issue a straight red card.

Frickley withdrew Fin Shrimpton to replace him with veteran goalkeeping coach Saxby but Carlton initially struggled to test him.

Frickley’s afternoon went from bad to worse on 35 minutes when Carlton took the lead from an own goal. Opoku was fouled just outside the area and Niall Davie’s free kick was diverted past the helpless Saxby by Everington.

Carlton thought they’d doubled their lead three minutes later when Clark headed home a Davie cross after some fine work by Whitton, only to be denied by an offside flag.

Frickley could have levelled just before half time when Jonathan Margetts got the wrong side of the Carlton defence but he pulled his shot wide of target.

Back came Carlton and when Clark ran onto a fine flick from Opoku his shot hit the outside of the post.

Daniel Fletcher then got forward and sent a cross to Daryll Thomas at the far post. His goal-bound shot was cleared off the line by Kern Miller as Frickley were hanging on.

Whiton the drove into the box and set up Davie but his shot went wide of target as the half time whistle sounded.

Carlton started the second half on the front foot and Clark drew a fine save from Saxby after another cross from Fletcher.

Davie then had Tyler Williams flummoxed as he went inside him before rifling a shot into the side netting.

Opoku was next to miss, shooting wide when clean through on goal after another fine Whitton pass.

Opoku’s presence on the pitch meant Carlton were retaining possession much better in the opposition half. As a result, Frickley were limited in their opportunities but they did look like they had the potential to score and all of the defence had to be alert at 1-0. They maintained their concentration throughout and had fine games.

Tommy Brookbanks and Mark Harvey brought on Eli Bako and Jack Gibson to try and get the all important second goal and a lovely passing move ended with Bako feeding Clark who fired over the bar.

Saxby was perhaps fortunate to avoid sanction when he appeared to slide outside his area still holding the ball and a quick Frickley break saw Steggles make a decent save from Margetts.

Gibson forced Saxby into a couple of decent saves as he showed some clever footwork in the area.

At the other end, Martin Ball and Toby Moore were both called upon to make excellent saving tackles as Frickley’s 10 men threatened to punish Carlton for their largesse.

Bako should have scored on 77 minutes when he ran onto a super pass from Gibson and rounded Saxby only to hit the side netting with the goal gaping.

The second goal finally arrived on 84 minutes. A Gibson header sent Opoku away on the right. He burst into the area and rifled low past Saxby to the joy of the travelling support at that end of the ground.

With time running out Fletcher made a superb tackle to snuff out an attack and Niall Davie made it 3-0 with virtually the last kick of the game, converting low into the corner of the net from an Opoku cross after he had run onto a lovely pass from Clark.

The win was well-deserved and the players came over to thank the very damp Carlton faithful at the end, who once again had travelled in good numbers.