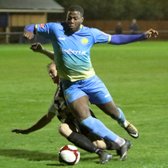 Carlton Town made it back to back wins with a 4-0 defeat of Wisbech Town at Stoke Lane.

The win saw Carlton keep a third successive clean sheet and move to the fringes of the playoffs in the early season table. It was a fine performance in front of a healthy midweek crowd of 122 who certainly got value for money on a pleasant October evening.

Tommy Brookbanks and Mark Harvey made one change to the side which had won at Frickley last time out with Joel Daft replacing Danny Elliott.

On a fine playing surface the Millers began well and Aaron Opoku ran onto a lovely Niall Davie pass to put the ball in the net on 18 minutes, only to be denied by an offside flag.

Davie was next to have a go at goal with a couple of shots that were blocked after a clever flick from Daryll Thomas.

The game became a little scrappy with a number of yellow cards dished out but Carlton took the lead on 33 minutes with a goal of real quality. Daniel Fletcher, Toby Moore and Dan Brown moved the ball calmly around the back before Brown slipped a pass to Martin Ball. He played a lovely ball down the right to Opoku.

The striker left Liam Marshall bamboozled as he surged past him before sending over a cross that Oliver Clark met first time and steered into the net.

Wisbech offered little in the first half but Sam Murphy and Opoku ended up in a scuffle on the stroke of half time and both received yellow cards.

Youngsters Joel Deft and Sam Whitton were both having fine games and Carlton wrapped up the win inside the opening 15 minutes of the second half. Opoku had already sent a delicious cross into the danger area with no one present and saw a header go wide after a fine run and cross by Fletcher before he was brought down by Jay Whyatt in the penalty area.

Opoku himself got up and rifled the spot kick into the top corner of the net.

Whitton then drove forward and hit a screamer that smashed against the post before Carlton added a third. Davie sent a fantastic ball through to send Clark free on goal. James Goff made a superb save from his effort but could only watch on as veteran Thomas sublimely passed the ball into the open goal from 25 yards.

Goff then did well to save from Opoku as Carlton threatened to run riot.

The Millers made a series of substitutions and some of the fluency went out of their play but they still added a fourth on 76 minutes when Whitton’s cross-come-shot evaded everyone and nestled in the corner of the net.

Wisbech had a couple of late opportunities but Steggles made one superb reaction save and Dan Brown headed off the line to secure the clean sheet.

At the end the crowd were generous in their applause for a fine performance by the Millers.