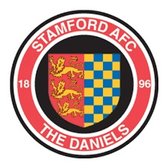 Joel Daft scored his first goal for Carlton Town as the Millers held title favourites Stamford to a 1-1 draw at Stoke Lane.

In a pulsating contest played at breakneck speed in front a large midweek crowd, Carlton had to endure constant Stamford pressure but defended magnificently and always looked like they had a threat on the counter.

It would have been incredibly harsh on the Daniels had they lost, but the Millers will be a little disappointed at conceding with just 13 minutes of the contest remaining. Stamford will point to their pressure, the fact they hit the woodwork and had a strong penalty appeal turned down as reasons why they deserved something out of the game and it would be hard to argue against that.

Tommy Brookbanks and Mark Harvey made three changes to the side beaten at Newcastle last time out. In came Lawrence Gorman, Danny Elliott and Patrick Quinn to replace Daniel Fletcher (injured), Daryll Thomas and Daft.

Carlton had the first opportunity when Oliver Clark fired just wide after a lovely ball from Martin Ball. Stamford though were soon at the Millers. They buzzed around the pitch non-stop allowing Carlton absolutely no time on the ball which meant the game was played at an incredible pace for virtually the whole 90 minutes. It was tiring just watching it, let alone playing in it, but Carlton’s youngsters coped remarkably well, tracking their opponents and keeping their shape.

Elliott succumbed to injury yet again on 19 minutes and was replaced by Daft, who opened the scoring two minutes later with his first touch. Niall Davie advanced down the left and then left two players in his wake with a lovely dart into the area. He looked up, squared the ball across the six-yard box and there was Daft unmarked to lift the ball into the roof of the net.

If anything that saw the Daniels increase their efforts and Jack Steggles made an excellent save from Sean Wright, before making another from Tom Siddons.

The visitors claimed a penalty when Harry Limb went down under challenge from Ball but the well-placed referee wasn’t interested.

The dangerous Cosmas Matwasa was denied by an excellent Davie tackle as the game reached half-time.

Carlton had a couple of free kicks in good positions early in the second half which came to nothing and were then forced increasingly backwards by wave after wave of Stamford attacks. Gorman and Dan Brown were resilient at full back, helped out by Davie and Quinn ahead of them, but special mention to Ball and Toby Moore at centre-half, both of whom had superb games and repelled everything thrown at them.

Moore made one excellent clearance from a dangerous Bartle cross before Brown did likewise moments later.

Sam Whitton, having another impressive outing just behind the always troublesome Aaron Opoku, had a rare Carlton effort but Danny Haystead made a comfortable save. At the other end Michael Armstrong fired just wide after a fine run.

The Stamford goal arrived on 77 minutes and was a little soft from a Millers perspective. The defence had done well to block yet another cross into the box but from Harry Vince’s corner Wright peeled away at the back post unmarked and headed home.

The visitors laid siege to the home goal in the final 13 minutes looking for a winner. The closest they came was in the last minute when a shot from distance hit the bar and Steggles made an excellent save from the follow up.

The keeper still had to be alert to clear a Bartle free kick in added time but defeat would have been harsh on the Millers whose efforts merited the point they earned.

At the end both teams were applauded off the pitch by the supporters. This was breathless stuff and the 173 spectators had full value for money. Some of the crowd may be amongst those fans of professional clubs being asked to spend £15 plus extras to watch TV coverage of soulless games played in empty stadiums. Forget that – this is what watching football is all about.