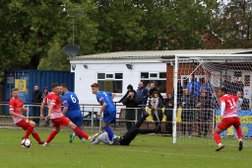 Carlton Town suffered their third defeat in a week as they went down 2-0 at Spalding Utd.

Goals in either half from Shane Clarke did the damage as the Millers remain pointless in the league. They had plenty of possession, particularly in the second half, but there is plainly something missing from the performances compared to last season.

The injury situation is a concern and Premier League clubs would struggle with seven first team players out injured, but it’s something Carlton are going to have to get on with and adapt to.

Tyler Johal, Jordan Smith and Danny Elliott were missing following injuries in the defeat at Banbury, and they joined Aaron Opoku, Tyler Blake, Tom Maddison and Lawrence Gorman on the sidelines. Into the side came Daniel Fletcher, Eli Bako and Daryll Thomas.

A bedrock of Carlton’s impressive record last season was the number of clean sheets kept, but hopes of repeating that here were dashed inside four minutes as the Tulips opened the scoring.

Toby Moore conceded possession in the Carlton half and Clarke combined with Jan Yeomans before firing an angled drive across Jack Steggles and into the net.

Carlton responded and Oliver Clark headed on a free kick to Moore whose fierce shot was deflected wide.

Joel Brownhill saw a free kick go just wide for the hosts in a scrappy first half, affected by a blustery wind. Meanwhile Patrick Quinn saw an excellent run and cross come to nothing as Spalding cleared the danger.

Niall Davie then attacked down the right before sending over a dangerous cross which was headed away from Thomas by Yeomans. Quinn picked up the loose ball and hit a shot that was comfortably saved by Michael Duggan.

Bako, Thomas and Clark combined with the latter hitting the post but the offside flag was already up. At the other end Steggles made a good save from a Joel Brownhill header.

Carlton’s best spell of the half came right at the death. Martin Ball, Clark and Quinn combined neatly before Clark rifled a shot at goal that Duggan could only parry but he was able to get to the loose ball ahead of Thomas.

Bako, Clark and Quinn then put Jonathan Mabonga away down the left and his goalbound shot was deflected away from goal by Ben Greenwood.

Carlton began on the front foot in the second half and Bako drove wide after a lovely run and cross by Davie.

Carlton made a triple substitution on 56 minutes with Joel Daft, Sam Whitton and Kamani Wilson replacing Bako, Quinn and Mabonga.

Six minutes later Shane Clarke scored his second, against the run of play. Spalding picked up the ball in their own half, counter-attacked at pace and Joel Brownhill slipped the ball through to Lewis Brownhill. His shot was saved by Steggles but Clarke was quickest to the loose ball and he made no mistake from close range.

Back came the Millers and Oliver Clark sent over a lovely cross from the right which Wilson steered towards the corner of the net, only to be denied by a superb save from Duggan.

Ball then hit a fierce free kick which Duggan could only parry away but, in contrast to Spalding’s second goal, there were no Carlton players able to take advantage.

Moore had a header from a Davie corner cleared and Daft was causing the home side problems on the left, creating opportunities that went begging.

Thomas slipped one ball into Daft whose cross was pushed away by Duggan with Wilson and Dan Brown unable to get to the loose ball.

Spalding almost grabbed a third when Jacob Fenton dispossessed Steggles outside of his area but Brown cleared off the line.

Carlton continued to keep trying, but too many balls were either under hit or over hit particularly set plays, and there wasn’t enough sharpness in the final third. As it was, Spalding saw out the final minutes of the game in relative comfort.

The Millers were once again well supported on the road, and the players acknowledged that support at the final whistle. They just to have keep working to regain the spark they know they can produce.