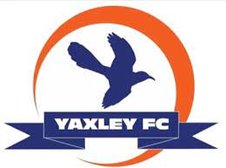 The win maintained Carlton’s unbeaten start to the campaign and saw them move to second place in the table ahead of a midweek trip to league leaders Halesowen Town.

The Millers had to do it the hard way, coming from a goal down and playing the last 20 minutes with 10 men after substitute James Matthews was sent off 10 minutes after coming on. But in the end was comfortable enough against a Cuckoos side who had won all of their previous home games.

Managers Tommy Brookbanks and Mark Harvey made three changes to the side which had beaten Sutton Coldfield last time out. Into the team came Jacob Sturgess, Danny Elliott and Khyle Sargent, replacing Lawrence Gorman, Jared Holmes and Tom Maddison.

Yaxley had been beaten 6-1 at Loughborough in their previous game but looked solid enough I the opening period of the game with Connor Peters particularly impressive. In bright sunshine it seemed as if the Millers were struggling to move the ball crisply on the artificial surface, with a number of passes overhit and a general lack of urgency throughout the team.

The home side had the first real chance when Kieran Preston made a stunning save diving to his right to keep out a close range Thomas Waumsley shot. From the resulting corner the ball wasn’t cleared but there appeared little danger when Preston gathered the follow-up cross. However the referee awarded a penalty for an off-the-ball push by Toby Moore and Liam Hook made no mistake from the spot, firing into the top corner. It was the first goal Preston had conceded since the opening day of the season.

Carlton had plenty of the ball but failed to test Aaron Butcher in the home goal at all during the first 45 minutes. The managers plainly had words at half time because within three minutes of the restart the sides were level. Niall Davie advanced down the left before slipping the ball to Aaron Opoku. He shimmied outside his marker and then fired low into the net at the near post.

Three minutes later Carlton were ahead. Nat Watson sent a corner into the box. A header from Davie wasn’t cleared and Moore was on hand to rifle home from six yards.

Yaxley responded and Kyle Nolan sent a 25-yard free kick just wide of target, but in truth Carlton’s quick-fire turnaround had taken the sting out of the home side.

Matthews came on for Sargent on 59 minutes and with his first touch he played a clever pass to Opoku who in turn sent Blake through on goal, only for Butcher to make a superb save.

Carlton made a double substitution on 67 minutes, bringing on Tolani Omotola and Holmes for Opoku and Elliott, but within two minutes they were down to 10 men when Matthews was shown a red card for a high tackle on Peters.

That meant Blake had to play deeper to support the midfield, leaving Omotola alone up front. The Millers kept their shape and indeed continued to create opportunities. One move saw Omotola hold the ball up before feeding Watson whose lovely cross saw Blake just failed to connect with the goal at his mercy.

Yaxley offered little beyond some deep crosses into the area which were comfortably dealt with by Moore, Dan Brown and Preston. Sturgess and Tyler Johal dealt ably with attacks down the flanks but Carlton still wanted the security of a third goal.

That came in some style on 88 minutes. Omotola held the ball up well before supplying Davie. He found Blake who turned John-Paul Duncliffe inside out before hitting a delicious curling shot from the left hand corner of the penalty area that flew around Butcher and into the corner of the net to send the vocal travelling support into delirium.

Once again the players left the field to a well-deserved ovation which they returned in kind to the away supporters.