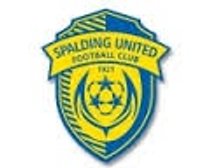 Carlton Town produced their best performance in some weeks as they won 3-0 away at Spalding Utd.

In blustery conditions and on a heavy pitch, the Millers dominated the game and were well worth the final margin of victory. They now go into the final 10 games of the season with renewed confidence as they look to finish in one of the play-off positions.

Managers Tommy Brookbanks and Mark Harvey made three changes to the side which had drawn with Sporting Khalsa last time out. In came Daniel Fletcher, Niall Davie and Tyler Blake for Tyler Johal, Danny Elliott and the injured Aaron Opoku.

Neither side impressed in the opening 10 minutes as the ball spent a lot of time in the air, but Carlton soon settled and Davie in particular was causing all sorts of problems for Scott Floyd at right back.

The opening goal came on 17 minutes. Fletcher and Blake combined on the left with Fletcher crossing into the area. Nat Watson got in front of Gialluca Bucci and headed at goal from a couple of yards. Ben Starkie hooked the ball away but only after it had clearly crossed the line and the linesman flagged to award the goal.

Minutes later Watson delivered a free kick to the near post which was met by Aaron O’Connor but the striker put his effort wide when in front of goal.

Dan Brown did well to cover a promising Spalding attack through Ben Seymour-Shove before Carlton doubled their lead on 27 minutes. Davie picked up the ball on the left hand side just inside the Spalding half. He went on a mazy run, beating Floyd and Archie Jones before drawing Sam Cartwright and then firing into the corner of the net from 12 yards.

Spalding tried to respond. Seymour-Shove crossed to Chris Ward whose header was cleared by Martin Ball. From the resulting corner Seymour-Shove hit an effort at goal from outside the area which Mark Rathbone did well to hold onto in the swirling wind.

Davie was then back on the attack, beating Jones and crossing into the danger area, just beyond both Blake and the far post. Tom Maddison then volleyed just wide from a Davie corner.

The Tulips had their best chance to score five minutes before half time when an underhit Brown back header allowed Jordan McCleod to run at goal. He took the ball around Rathbone but could only find the side netting with the goal gaping. It was certainly a let-off for the Millers.

Carlton responded immediately with a fabulous passing move that saw O’Connor, Watson and Lawrence Gorman all link up with Watson sending Gorman away down the right and his cross headed over the bar by Khyle Sargent from a glorious position.

Sargent more than made amends moments later when he deflected a close-range Cartwright effort over the bar and away from danger.

With Carlton playing into the strong wind in the second half, the question was whether Spalding could mount a serious challenge. In short, the answer was “no” as the work-rate of the whole team simply wouldn’t allow the home side to settle.

Indeed, Davie was desperately unlucky not to extend the lead on 63 minutes when his superb free kick from 20 yards hit the post with Michael Duggan well beaten. Spalding counter-attacked immediately and only an excellent tackle from Gorman stopped Seymour-Shove running through on goal.

A deep cross from the Spalding right then caught the wind, forcing Rathbone to palm it onto the bar and away.

Back came Carlton and Fletcher played the ball into Watson who lofted a chip into the path of O’Connor. His shot was well saved by Duggan and the loose ball fell just behind Blake.

Stefan Broccoli fired wide from a good position before Duggan was called on again to save from O’Connor, this time at his near post.

Blake then fed O’Connor who took the ball around Duggan but found the angle to narrow to shoot. He tried to tee up Davie but Spalding were able to clear.

Still the Millers pushed on and when Davie did well to block an attempted clearance in midfield, he and O’Connor ran forward with Davie’s shot being saved by Duggan.

An angled ball from left to right was controlled by Dylan Edge and when he cut into the area he looked certain to score but he lifted his shot high and wide. There were 10 minutes remaining at the stage and a goal would have given the Tulips new life, but instead Carlton wrapped up the win with a penalty awarded two minutes later.

Maddison played the ball into Blake who was absolutely clattered by Cartwright for a stonewall penalty. Blake was treated for some time and was in fact substituted before the penalty was actually taken. Up stepped Maddison to send Duggan the wrong way and seal a most impressive win.

The team fully merited the applause of the travelling support at the end of the match. To a man, this was a fine performance.