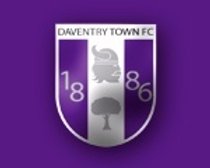 Tyler Blake missed a penalty but then scored the winner as Carlton Town started 2022 in style with a 3-2 win against Daventry Town.

The Millers came into the game on the back of a winless December which had seen the team slip out of the play-off places. But goals from Nat Watson, Khyle Sargent and Blake were enough to overcome a determined Daventry side who played the last 20 minutes with 10 men after captain Ross Harris was sent off.

Carlton made just one change to the side which had drawn with Shepshed last time out with Aaron Opoku, back from suspension, replacing Alex Howes, who dropped to the bench.

On a pitch that held up well considering the recent weather it was the visitors who started the sharper and they took the lead on 18 minutes when Jack Bowen headed home a Bleu McNeil cross at the near post.

The Millers should have levelled seven minutes later when the referee awarded them a penalty for handball by Jeff Woodward as Watson and Sargent tried to combine. Up stepped Blake but James Martin in the Daventry goal dived to his right to save the spot kick.

Carlton kept attacking and a fine through ball from the impressive Danny Elliott saw Opoku advance on goal but his clever header drew a fine save from Martin.

The Millers were soon level though. Opoku was fouled on the left hand edge of the penalty area and Niall Davie’s superb free kick was converted at the far post by Watson.

By 35 minutes Carlton had turned the game around completely and went 2-1 ahead. Lawrence Gorman’s deep cross from the right was headed back into the area from Davie on the left. Blake did really well to hold the ball up and lay it back into the path of Sargent who steered the ball delightfully into the top right corner of the net from 12 yards.

If Carlton thought Daventry were finished they were mistaken as the visitors were back on level terms within two minutes. There seemed little danger when a long throw from McNeil was nodded on by Bowen into the path of George Ball, but Ball was allowed time to turn and shoot from the edge of the box and his effort beat Kieran Preston and nestled in the net.

Indeed it was the visitors who had the best chance to take the lead before half time when Nat Gosnal-Tyler took advantage of a slip in the Carlton defence to run through on goal but he pulled his effort wide of target.

The Millers made Daventry pay by scoring what turned out to be the winning goal on 52 minutes. Blake started the move with a throw-in on the left to Opoku. Opoku left Harris trailing as he advanced to the goal line, into the area and then had the presence of mind to look up and find Blake who netted from a couple of yards.

Daventry weren’t finished and Ball, who looked lively throughout, saw a fine run and shot diverted away from goal by Dan Brown.

Their task was made harder on 69 minutes when Harris made no effort to play the ball and simply took out Blake who was running onto a clever Niall Towle pass. The referee had no hesitation is showing a straight red card to the Daventry captain.

Carlton then surged forward looking for a fourth goal to guarantee the win. Blake ran onto a Watson pass and fired low at goal, with Martin pushing the shot onto the near post.

Tyler Johal then beat two players in a super run down the left before crossing towards Blake, only to see Woodward make an excellent interception.

Howes drew a decent save form Martin before playing a fine pass to Blake. The striker cut inside Woodward and with the goal at his mercy lifted his shot over the bar.

Toby Moore and Brown looked solid down the middle as Daventry rarely threatened once they had gone down to 10 men. There was a late free kick into the Carlton penalty area but the Millers defended it well to secure the three points.