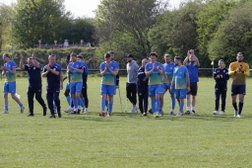 Carlton Town ensured their fight for the final play-off spot would go to the last day of the season with a comfortable 4-0 win at home to Spalding Utd.

An Aaron O’Connor brace supplemented by strikes from Tyler Blake and Aaron O’Connor gave the Millers their biggest home win of the campaign in front of an excellent attendance of 272, boosted by a terrific turnout of visiting fans.

The Millers started the game two points behind fifth-placed Belper Town with both sides having two games remaining. Carlton knew anything less than a win would most likely mean Saturday’s trip to Stamford would be a dead rubber.

Tommy Brookbanks and Mark Harvey made one change to the side which had won at Cambridge City two days earlier, with Jared Holmes replacing the injured Tom Maddison.

In glorious sunshine Carlton started well. Jack Lynch did well to intercept an early cross from Blake after good play by Watson, but by 12 minutes the Millers were ahead. Holmes, Alex Howes and Blake combined before the ball was fed to Daniel Fletcher on the left. He stepped past Aaron Hart before delivering a pinpoint cross to O’Connor who headed it beyond the reach of Michael Duggan.

Spalding’s best spell of the game followed soon afterwards. They had a strong shout for a handball penalty turned down and Scott Floyd fired just wide after decent play from Gregg Smith and Ben Seymour-Shove.

Two goals in three minutes towards the end of the half effectively wrapped up the win for Carlton. On 38 minutes Watson dispossessed Lynch in the right wing position. He looked up and squared the ball to O’Connor who swivelled and fired low into the corner of the net.

Minutes later Lawrence Gorman crossed from the right, Khyle Sargent headed against the bar but Blake was on hand to volley home the rebound like the poacher he is.

In the second half Carlton kept possession and Spalding rarely threatened, with Martin Ball and Dan Brown keeping the threat of Smith at bay, and Shaun Rowley dealing with any crosses into the box.

O’Connor put the ball in the net albeit after an offside flag had been raised, while Blake shot just wide after good work by substitute Louis Czerwak and Gorman.

On 74 minutes a lovely move involving Fletcher, Czerwak and Watson saw Czerwak cross to Blake, only for the striker to be denied by a superb block from Duggan. Spalding’s relief was shortlived however as Czerwak played the resulting corner to Gorman. He slipped the ball inside to Watson whose delightful chip was headed home by Aaron Opoku.

Opoku then ran down the right before playing the ball inside to Blake. He knocked it back to Watson whose 25 yard drive flew just wide of goal.

Rowley had to make a decent save from Liam Adams to preserve his clean sheet while Ryan Tait saw a shot from the edge of the box just miss the target.

Duggan had to make one final save from Opoku in the final minute of added time before the referee called an end to proceedings in Carlton’s final home game of the season.

News of Belper’s late winner at Loughborough meant the two point gap remained for the time being, but that was no impediment to the entire squad receiving a richly deserved ovation from the home support at the final whistle.