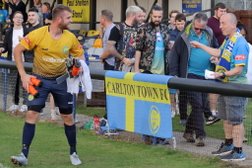 Jack Steggles was Carlton Town’s hero as they came from behind to beat Bedworth Utd on penalties in the FA Trophy.

Steggles not only saved three penalties in the shoot out to secure the win, but he also scored one himself and made some key saves during the 90 minutes to keep the Millers in contention.

The goalkeeper was back from his loan spell at Newark due to Kieran Preston’s unavailability as part of his loan from Basford. He was one of two changes to the side that beat Coleshill last time out, with Toby Moore in for the suspended Deon Meikle.

On a glorious day Carlton began slowly and Lawrence Gorman almost put through his own net on four minutes when his back pass was misjudged by Steggles and hit the post before being cleared.

Carlton offered little as Bedworth controlled proceedings but Louis Czerwak was close to levelling the scores midway through the half when his lovely shot on the half turn beat Bedworth goalkeeper Sam Lomax only for Ryan Moore to make an excellent clearance off the goal line.

Forward came Bedworth and when Eesa Sawyers cut in from the right he steered a shot past Steggles only to see it strike the post. The ball rebounded back into the six yard area and Harrison looked certain to score only for Steggles to spread himself and make a superb double save to keep the visitors at bay.

Carlton improved a little as the half reached its conclusion and Gorman fired into the side netting before Blake saw Lomax make a comfortable save from his shot and Kieran Knight went close with an audacious overhead kick.

Nonetheless it had been a very flat first half from the home side and Tommy Brookbanks and Mark Harvey made changes early in the second half, bringing on Nat Watson, Tyler Johal and later Daryll Thomas in an effort to get the Millers attacking.

Carlton certainly carried more of a threat in the second period, but Bedworth still had chances and Steggles had to make another fine double save, again from Harrison and Sawyers, to keep Carlton in the game.

That proved crucial as with 13 minutes remaining the Millers levelled with a stunning goal. Blake was fouled by Reece Blackmore a few yards outside the penalty area to give Carlton a free kick in a dangerous position. Niall Davie and Watson both stood over the ball, but it was Davie who hit an absolute screamer that flew past Lomax into the top corner via the underside of the crossbar.

Carlton were now in the ascendancy and a delicious Davie cross was just begging to be converted before Ryan Moore made a superb clearance.

With the game entering added time Blake looked to be brought down by Muggleton but the referee didn’t agree and Steggles had to make a late save from a Greenbacks attack before the final whistle.

With no extra time, the game went straight to a penalty shoot out. Tom Maddison converted for the Millers and then Steggles saved from Liam Lockett. Lomax in the Bedworth goal saved from Dan Brown before Steggles made his second save, this time from Luke Keen. Lomax once again made a save, from Niall Davie, before Muggleton drew the visitors level with Bedworth’s first successful penalty.

So sudden death followed. Toby Moore stepped up for Carlton, only to be called away as Steggles was nominated next. He made no mistake with a lovely penalty but Blackmore responded in kind to take it to a seventh round. Toby Moore returned, stumbled, settled himself and then fired home an excellent spot kick and Steggles secured the win, diving to his left to palm away Daniel Preston’s penalty.

It was a dramatic way to seal the win and there was evident delight amongst the players, who to a man engulfed Steggles before coming over to thank the fans for their support.