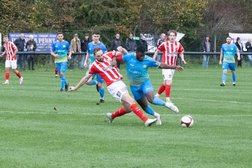 A second half brace from Montel Gibson saw Stourbridge come from behind to win their FA Trophy tie at Carlton Town.

The Millers pushed the Glassboys all the way and were inches away from forcing a penalty shoot out when Alex Howes's injury time strike cannoned off the woodwork, but the home side came up just short against opponents who play their football one step higher in the pyramid.

In front of an excellent crowd of 271, managers Tommy Brookbanks and Mark Harvey made five changes to the side which had drawn with Histon last time out. In came Jack Steggles, Daniel Fletcher, Martin Ball, Jared Holmes and Aaron Opoku. They replaced Kieran Preston (ineligible), Tyler Johal, Toby Moore, Tom Maddison and Kieran Knight.

This was Carlton’s first ever appearance in the First Round of the Trophy albeit it only equalled their previous best run in the competition due to a re-naming of the round numbers a couple of years ago.

In an evenly contested first half Darryl Knights had the first serious attempt on goal, but the Stourbridge captain saw his fine drive draw a superb diving save from Steggles in the Carlton goal.

Steggles then had to be alert to save from Ethan Moran before Niall Davie hit a scissor kick just wide at the other end.

The visitors enjoyed the majority of the possession but created little against a well-organised Carlton defence and it was the home side who opened the scoring on 41 minutes. Opoku, excellent throughout, ran onto a clever quick throw-in from Nat Watson, held off Reece King and fired past Charlie Price.

Stourbridge levelled 45 seconds into the second half when former Grimsby Town striker Gibson found himself alone at the far post and was able to head home a deep cross from Lee Vaughan beyond Steggles who had come to claim the ball and was off his line.

Carlton responded well and Tyler Blake fired just over the bar from 12 yards before Davie did the same after some fine build up play.

Opoku then ran through on goal after some good work by Blake and keeper Price did well to dive at Opoku’s feet and deny him a shot at goal.

Stourbridge started to pin the Millers back as the half progressed and Gibson fired wide when it looked easier to score.

With the game entering the final 15 minutes both sides knew the next goal would likely win the game. Jared Holmes was desperately close for Carlton with a shot from the edge of the box while the impressive Jack Wilson drew another superb save from Steggles with Lawrence Gorman making an excellent clearance.

A dangerous Stourbridge cross from the right was sliced into the air and Steggles did well to save from the resulting header before the visitors sealed the win with five minutes remaining. They were awarded a throw-in on the left which looked like it should have gone to Carlton. Either way, the Glassboys attacked down the left before the ball was played across to James McQuilhan. His shot from the edge of the box was stabbed home from close range by Gibson with Carlton appealing in vain for offside.

The Millers threw everyone forward to try and snatch an equaliser and substitute Howes almost did it when his fierce drive crashed against the crossbar in added time with Price well beaten. It wasn't to be for Carlton as Stourbridge held on for the win.