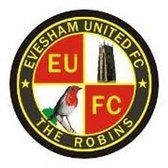 Carlton Town bowed out of the FA Trophy following a 2-0 defeat at Evesham Utd.

First half goals from Ryan Paddock and Jordan Lymn did the damage but the Millers returned from Worcestershire frustrated at the manner of their defeat. They had plenty of possession, created numerous chances but a combination of inspired goalkeeping from the Robins keeper plus their own careless defending meant that Evesham had a reasonably comfortable afternoon once they had the two goal lead.

Tommy Brookbanks and Mark Harvey made two changes to the side which drew with Stamford last time out with Jacob Sturgess and Joel Daft replacing Danny Elliott(injured) and Patrick Quinn.

On a fine pitch and with an excellent travelling support Carlton began well and moved the ball around nicely without creating a great deal. Evesham looked tidy and it soon became clear that the opening goal was likely to be pivotal to the outcome.

Carlton had a warning on seven minutes when they failed to clear a corner and only excellent reactions from Dan Brown prevented a goal.

Jack Steggles was then called upon to save well from an Aaron Basford free kick.

Carlton’s first chance came on 11 minutes. Some fine play between Daft and Lawrence Gorman led to Brown slipping a delightful ball into Aaron Opoku but goalkeeper Lewis Clayton was out quickly to deny him.

Martin Ball then played an excellent through ball to Niall Davie on the right. He flicked the ball over Jordan Staten before seeing his cross cleared from the danger area.

For all their neat football the Millers went behind on 18 minutes to the softest of goals. A corner from the right wasn’t cleared and Ryan Paddock stabbed home from a couple of yards at the far post.

Carlton responded and Oliver Clark fired over the bar from an Opoku pass before Sam Whitton went desperately close, seeing Clayton make a superb diving save from his 20-yard piledriver.

That was a key save as within 60 seconds the home side were two goals ahead. A long ball forward didn’t seem to present too much danger but Jordan Lymn flicked the ball over Brown then outpaced him before firing low across Steggles into the corner of the net.

Steggles then made a decent save from Basford before Toby Moore made a fine stop to keep Josh Hunt away from goal as Evesham lifted the pressure.

Carlton pushed hard to pull a goal back before half time and Clayton made a magnificent save from a Clark effort, tipping his goal bound screamer over the bar, before Opoku fired just wide from inside the area.

Clayton was at it again in the final seconds of the half, tipping a Daft effort around the post after Ball set him up.

That was Ball’s last action as he was replaced by Daryll Thomas at half time. Clark drew another decent save from Clayton early in the second half while Jamie Clarke saw a dangerous cross cleared at the other end.

Steggles then made an excellent save of his own from Harry Franklin before Carlton’s appeals for a penalty for handball by Paddock were ignored by the referee.

Sturgess was having a fine game at right back and he helped create Carlton’s best chance of the game when he played the ball up to Davie. Davie switched play to substitute Quinn who darted left and played a lovely cross to Opoku, unmarked 8 yards from goal. The striker hit his effort straight at Clayton who made yet another excellent save but Carlton really should have given him no chance.

Steggles made yet another fine save from Franklin and Clarke fired over the bar as both sides created chances.

Evesham had opportunities to kill the game with Jamie Lucas heading wide form a good position and Steggles making an excellent stop from a Lymn header but the closest the Millers came to scoring was in added time when Franklin was inches away from heading a Davie free kick into his own net.

Well over 30 Carlton fans made the long trip and the squad came across at the end to thank them for their support. It wasn’t to be on the day and the team now have to “concentrate on the league”.