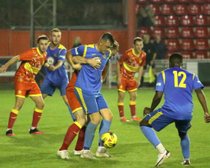 The Millers went into the game against their higher-ranked opponents with several players out through injury and suspension but they more than matched the Puritans, played some excellent football at times and were desperately close to taking the game to penalties.

As it was, they and the impressive number of travelling supporters can take great encouragement from the display as their focus now returns to the Northern Premier League.

Mark Harvey was in sole charge on the night and he had to do without Lawrence Gorman, Tyler Blake and captain Tom Maddison, all injured in Saturday’s defeat against Lincoln, plus the injured Aaron Opoku, Daryll Thomas and the suspended Daniel Fletcher.

Into the side came Dan Brown, Jonathan Mabonga and, for his full debut, Patrick Quinn.

Banbury, managed by former Coventry City star Andrew Whing who scored the final ever goal at Highfield Road in 2005, included football league experience in their line up including striker James Constable.

Carlton had Jordan Smith on his own up front but as the game got underway it soon became apparent that he would be supported by Oliver Clark and Niall Davie at every opportunity.

The Millers began well, passing the ball neatly on an excellent surface, and Tyler Johal had an early effort on goal.

Banbury responded and Martin Ball had to be alert to make a superb tackle as Constable looked set to go clear.

Back came Carlton and Davie sent over a deep cross which was cleared just before Smith got to it.

Connor Roberts had the first on-target shot of the game on eight minutes but Jack Steggles saved comfortably.

As the half wore on Banbury started to pin Carlton back in their own half. Dan Brown did well to head a Kelvin Langmead goalbound header off the line before Steggles pushed a fierce drive from Pablo Haysham over the bar.

A lovely run and cross by Aaron Heap almost led to a goal for Constable as Carlton fought to keep the home side at bay.

The Millers had further injury difficulties as Danny Elliott was replaced by Eli Bako just after the half hour but Carlton still offered some threat. Quinn was inches away from a debut goal when Heap completely missed the ball in his own area but the youngster just couldn’t connect.

Toby Moore was then involved, producing a superb reducer on Rasulo, before heading another Banbury effort away from under the crossbar.

The Puritans finished the first half the stronger but Carlton kept their composure and took the game to their opponents more and more as the second half progressed.

A lovely move down the left involving Johal, Smith, Bako, Clark and Brown saw the latter cross to Bako only for goalkeeper Jack Harding to save well.

All of the defenders were having excellent games and Clark and Bako were buzzing around the midfield breaking up Banbury attacks and looking to get the ball forward.

The home side were starting to get a little frustrated as Carlton were getting on top midway through the half.

Brown slipped the ball to Davie who played a lovely through ball to Smith. He ran clear of his marker but his first touch was just too heavy and Harding was able to gather.

Johal then delivered a free kick to the back post which was met with a towering header across goal by Clark. Moore found himself unmarked just yards in front of goal but somehow missed his kick and was probably pleased to see the offside flag raised.

The nearest Carlton came at this stage to scoring followed on 75 minutes when Toby Moore brought the ball out of defence, ran through the midfield, slipped it to Bako who cut inside and hit a delightful curling shot from the edge of the box which flew inches wide of the post with Harding beaten.

Two minutes later Banbury punished the Millers by taking the lead. A move down the left saw the ball played inside to Rasulo, who had been impressive all night. He took a touch and then hit a low drive from just outside the area which beat Steggles in the corner of the net. It was a good strike but Carlton will be disappointed at the space he was given.

The Millers refused to give in and Ball advanced before delivering a deep cross which Harding had to claim.

Carlton then laid siege to the Banbury goal. Davie had a shot deflected wide after a good run and cross by Sam Whitten, Kamani Wilson just failed to get on the end of a Davie cross and Toby Moore had a header cleared.

In the last second of added time Carlton were so close to scoring a deserved equaliser. Whitten nodded the ball to Clark who stepped into the area and then fired at goal only to be denied by Harding’s knees. The loose ball was picked up by Davie who hit a fierce drive from the edge of the box inches over the bar to the despair of the travelling support behind the goal.

It was to be the last kick of an enthralling cup tie and the entire squad came across for richly deserved applause at the end of a pulsating game of football.