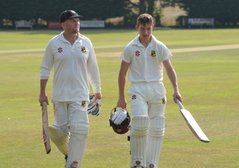 On a day where the weather can only be described as 'cricket weather', Gresford won the toss and elected to field first.

With a batting lineup, lacking the usual calibre of batsmen, it was down to J.Fisher (9) and D.Johnson (0) to open the batting, with Johnson falling in the 4th over.

M.Isgar (8) joined the attack but to no avail, as he was bowled out for single figures. I.Jones (41) came out to join Isgar, before his swift exit, and in his normal classy way, embedded himself into the game, building a solid platform for his batting performance ahead.

Stand-in skipper N.Hughes (7) joined Jones at the crease but couldn't find the gaps before looping an easy catch up.

Carmel swaying at this point, as though they had just taken a heavy right jab.

Stand-in wicketkeeper S.Moores (16*) came out to support Jones with the charge that was to come. Jones playing some beautiful drives straight back passed the bowler and, on one occasion, pushing Moores to run a four.

The score was ticking up and the late introduction of L.Rowles (17*) saw Carmel post a respectable 117-6 from 40 overs.

Carmel started the second innings on the front foot as C.Hughes (2-23) bowled an unplayable ball, cutting back onto off stump first ball to remove the opener. D.Johnson (1-22) followed suit in the 4th over clipping the top of off stump, resulting in both openers being back in the changing rooms.

As the match progressed, the pressure increased on Gresford as no batsman was taking hold of the match. A.Jamil (3-10) and I.Jones (2-25) were the cause of this pressure, until the opposition captain took matters into own hands. The game started to get away from Carmel and pivotal catches were dropped.

Unfortunately, Gresford won the game with 3.4 overs to spare and only 2 wickets left.