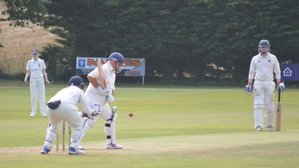 Carmel 2nd XI captain Cameron Ackroyd won the toss and elected to field, which is expected early season at Pen-Y-Gelli.

It was a flying start for Carmel as Steve 'Scooter' Jones (3-17) dismantled the top 3 batsman for a combined score of 3 runs.

As the middle order started to appear for Llanrwst, it was looking brighter for the batting side as their number 4, single handedly took the match to Carmel and put Llanrwst in a position where they could win, scoring 83 of the 134 run total.

No other player reached double figures, as J.Owen (2-27) picked up a couple of wickets from Llanrwst's extended tail.

After looking like they might have an easy afternoon, Carmel had to apply themselves with the bat.

C.Ackroyd (7) opened with B.Davies (27) who made a good solid start putting on 46 for the first wicket, before Davies was bowled.

At 3, J.Hewitt (32) who came in and picked up where Davies left off, hammering Llanrwst with some mighty blows.

From being in a strong position and a win in sight, to an inexperienced batting lineup collapsing to a 7 run loss. J.Owen (15) was the only other player to score double figures.

Carmel lose by a narrow margin, but an encouraging improvement from the first week.