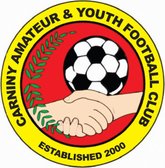 Anyone interested in becoming a member of Carniny Youth or the Senior side, Carniny Amateurs, should contact us via the contacts listed below or via the email contact form above.

As well as providing an Irish FA approved Football Development Centre the club have eleven youth sides and one senior side competing in Div 1 of the BSMLL.

Carniny Amateur and Youth FC are also currently on the look out for enthusiastic aspiring coaches to join their progressive local football club. The club are particularly interested in recruiting coaches for their Football Development Centre which will cater for children born in 2015, 2014, 2013 starting with the next session in September. Coaches will be progressed by the club through the Irish FA Coaching ladder.

If you think you can put something back into football and our club please make contact with the club at caayfc@outlook.com contact 07850669666.