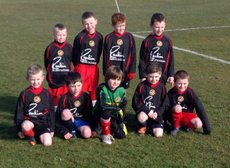 Under 8s Enjoy Tournament Action
Carniny 2005 took 9 players from their squad to compete in the annual LarneYouth Soccer Sevens Easter tournament. With their time at the FDC coming to an end this is the start of several planned friendlies and competitions to gain experience before the leagues start next season. They had 4 games to get through to decide the group with the first against Eddie Irvine 05.
Carniny Youth 0-0 Eddie Irvine Youth
Carniny started strongly with Leon Graham going close with a few long range efforts. The defence stood firm with Harvey Scott & Lewis mcKee denying any opportunities. However despite dominating the game Carniny failed to find the net and the game ended 0-0.
Carniny Youth 3-4 Bertie Peacock
Next was a well drilled Bertie Peacock side. To their credit Carniny tried to play football from the back but gave away the ball too easily in the danger area and conceded 2 goals. Anthony Greer managed to pull off some great saves and Carniny broke away to score with a well taken goal by Jack Kennedy. Carniny continued trying to play football but again some mix ups meant Bertie's went 4-1 up. Game evened up and again Kennedy finished a fine move to make it 4-2. Carniny grew in confidence and lost the hesitation that was apparent at the start and pressed with Kennedy getting his hat trick. Too late though despite pushing for an equaliser the game ended 4-3 to Peacocks.
Carniny Youth 0-0 Ballymoney Utd YA
3rd game was Ballymoney. 2 evenly matched teams meant the chances were few and far between. The energy of Harvey Scott & Conlin Neill in midfield created chances for Carniny and Luis White up front went close but the game ended 0-0.

Carniny Youth 0-0 Celtic Boys
Needing to win the 4th game against Celtic Boys Carniny pushed forward from the off. Adam Douglas at the back marshalled the defence and fed the midfield of Cameron Moody, Greer and Neill. Graham up front tried with every opportunity but couldn't find the net. A tired Graham was replaced by Kennedy and Carniny pressed with Greer scooping a shot onto the bar. The game ended 0-0 and also ended Carninys chances of making the semi finals as they came 3rd in their group

A good run out for the lads with a lot of positives from the games. Just need to find the net on a few more occasions to get that extra bit of luck but they've proved they can hold their own against the best teams in their age group.