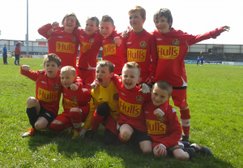 UNDER 8s IN IFA DEVELOPMENT PROGRAMME

Carniny's youngest team were one of the select teams invited to take part in the IFA soccer development plan for those born 2005. Emphasis on small sided games to encourage skill development.

Carniny were drawn in a group with Holywood, Springfield Star & Ridgeway Rovers - 3 teams from Belfast they have never faced before.

Carniny Youth 4-0 Holywood
Carniny took this game to their opponents with constant pressure and it paid off as after 5mins Jack Kennedy squared the ball to Cameron Moody who tapped in from close range. The 2nd goal came from a Leon Graham free kick and Moody was there again to score a header - his 1st ever headed goal!! The next was a corner swung in by Adam Douglas which was only cleared to Graham who hit a long range effort into the top corner for 3-0. Holywood then pressed and a free kick was saved by Archie McGreevey and then cleared by Ciaran McQuillan who passed to Graham. His long range pass found Kennedy who scored when 1on1 with the keeper.

Carniny Youth 3-0 Springfield Star
Springfield proved tougher opposition but from good pressure a McGreevey pass found Kennedy who scored with his left foot. With Harvey Scott playing well on the right he passed to Kennedy who scored from a tight angle with his right. Carniny introduced 2 subs Anthony Greer and Conlin Neill and they both made an immediate impact. Greer battled and won the ball in midfield to play a pass to Kennedy down the wing who took the ball on to square to Neill who scored a tap-in.

Carniny Youth 3-0 Ridgeway Rovers
With the conditions now atrocious Carniny took the field against Ridgeway Rovers, well respected in youth football. Again Carniny dominated but it wasn't long till some slick passing moves led to a goal from Kennedy from a Graham cross. Ridgeway pressed and the game ebbed and flowed but from a Neill pass, Harvey Scott scored Carniny's 2nd. The game was over when Moody scored to make it 3-0 from a chance 1on1 with the keeper.

All in all a great day for the lads confidence despite the terrible weather conditions and they all enjoyed this latest workout.