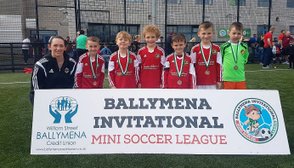 WEEKEND ROUND UP SAT 1st JUNE

Last weekend saw Carniny teams in action at the P4 section of the Ballymena Invitational Mini Soccer league at Ballymena Showgrounds. The boys enjoyed a great day in the sunshine fielding a p4 team and a team playing up with P2.3 players in the tournament. The Carniny boys tested their skills up against team s from Ballymena United Youth Academy and Star United Youth.

Carniny Rovers P2/P3's took up the challenge of playing ‘up’ in the P4 Ballymena Invitational Mini Soccer league. The whole team put in a great effort including Oskar Musial making some great saves in goal. Gerard Scullion produced a solid performance in defence. Jack Greer & Jamie Faloon in midfield/ defence with solid performances from both. A sound performance from Ben James up front. The two star players were 'the little engine' Isaac Harvey in midfield & Callum Tweed who scored a fantastic goal in the last match.

Carniny AYFC entered two teams from the 2011 squad in the BIMSL tournament at Ballymena Showgrounds. The P4 team played seven games winning four, drawing two and only losing one. The P3 team took he challenge against the older boys in their stride, but everyone played with great effort and enthusiasm. Jonah Weir Rogers was the star player for the P3 team. John Bell was the stand-out player for the P4 team. Jamie Davidson also produced some great saves in goal. Well done to the boys who were really tired at the end due to the heat. Thanks to all the parents again for your support.

Carniny took two teams to Carryduff Colts Cross Community Tournament early on Saturday morning. The boys had a great day out with plenty of football playing against teams from Carryduff Colts, Aquinas, Holywood and SOPFC. Both teams reached the semi final stages of their respective competitions.

The club are looking for a manager, coaching staff and additional players for their Senior Dev squad who play in the Ballymena Provincial league. Anyone interested should contact Billy O’Flaherty 07850669666. Their season will start Sept 2019 and would suit anyone available for afternoon football.

The club will host the second of it three prize nights this Saturday (8th) when the U16s, Development and senior squads will host their evening in the Adair Arms. The following Saturday at the sane venue the Football Development Centre will round up the awards when the FDC will have their presentation day at 2 pm at the Adair Arms. Tickets for the FDC afternoon can be obtained through Davy Boyd 07803 974402.