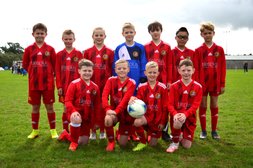 CUP EXIT FOR UNDER 11s

The Under 11s team played Limavady on Saturday morning in the NIBFA cup. The boys got off to a bad start losing an early goal after failing to clear the ball from a corner. After that however they battled back into the game and created a few chances of their own but failed to score.
Limavady added a second goal before half time again following slack defending.

In the second half Carniny were under pressure for spells and Jamie Davidson made several great saves to keep them in the game. The wee reds just couldn't create any clear cut scoring chances and Limavady ran out winners progressing to the second round of the cup. Carniny will now play in the Plate competition.