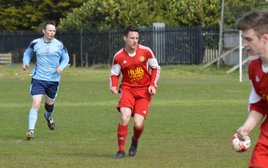 A late Matthew O'Flaherty header sealed the win for Carniny in their penultimate league game of the season.

Carniny looked a little jaded after their midweek game and never really got playing to their potential in this game. There was little to talk about in the first half with Barry Simpson missing an opportunity to give the Reds the lead, going one on one with the keeper who denied him with a good save. Towers also had a chance to score at the other end but like Carniny failed to convert. All square at the interval.

Seven minutes into the second half Niall Shannon in the Carniny goal brought a Towers player down after being left exposed from a poor backpass. Niall made a very smart save and kept it at 0-0. Despite having the ball for the most part Carniny struggled to create any clear cut chances. The introduction of Benji Agnew, Matthew O'Flaherty and Declan Higgins proved the catalyst and they finally got the goal five minutes from time through a Matthew O'Flaherty header.

A largely frustrating game with little to talk about, but another three points for the Seniors that moved them up into third spot in the league with one game left.