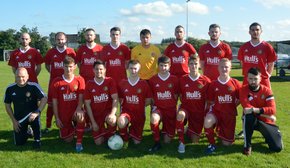 SENIORS COME FROM BEHIND TO TAKE SHARE OF THE POINTS

In the second half Carnlough continued to play direct and deservedly got the lead. We weathered the storm and began to create and grabbed an equaliser 25 minutes from time a neat near post finish from Barry Simpson. Carnlough were then reduced to 10 and we had a couple of good chances forcing good saves from Daryl Asquith in the Carnlough Goal.

We were delighted to wear our new home kit for the first time tonight.. Massive thanks to Brendan Doherty and Hulls for their support.

Also a mention for young Eamon McAllister who made his senior debut and was excellent, working very hard and having a hand in the equaliser.