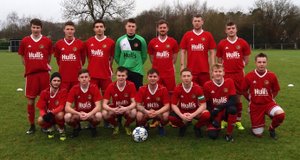 Carniny Amateurs were first out of the blocks in this division one match against Ahoghill Rovers on a bitterly cold morning at the Showgrounds. After a quick start young Eamon McAllister slotted a through ball into the path of Conor Doherty who carried the ball on to fire high into the top right hand corner giving the home side the lead after six mins. The Carniny men continued with their early high tempo and an exchange between Jonny Carson and John Costello sent the latter through one on one with the advancing keeper, holding his head to slot past and double the home sides lead. Only two minutes after the restart it was Carson's turn as he fired into the Rovers keeper who did well to parry it away but Carson was on hand again to net the rebound form close range. Ahoghill stuck to the task in hand and kept trying to find a way back into the game but on the half hour mark Carson scored his second and Carniny's fourth with a super strike from outside the box giving the Rovers keeper no chance.

After the break Ahoghill weren't about to give up and as Carniny didn't close down an attack from Rickie Reid the Ahoghill player sent a looping high ball over the Carniny keepers head to bring the score back to 4-1. Ahoghill began to work themselves back into the game as Carniny seemed to sit back on their lead but a second goal and a Carniny's fifth from Conor Doherty put the game out of reach for the visitors who never gave up until the final whistle. 5-1 to Carniny Amateurs at the final whistle. The same two teams will meet each other twice again in the Ace and Rainey Cups before the end of the season.