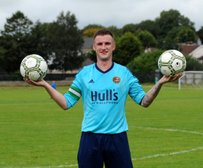 Carniny Amateur and Youth were matched against second division outfit Randalstown in this Zala Cup 3rd round at the Showgrounds. The match started evenly with a few competitive challenges in typical cup tie fashion. In the early stages Carniny wide men Campbell and Johnston began to cause problems for the visitors whipping in crosses that their forwards were failing to connect with in the box. It was Carniny however that broke the deadlock on 20 mins with Matthew McComb working his way across the front of the Randalstown box only to be brought down for a free kick. Up stepped Andy Campbell who lofted a free kick in to the top right corner rebounding in off the post. Their second came from Johnston on the right flank crossing in for Chris Wilgaus to net from close range. Their third came from the same source as Johnston found McMeekin unmarked in the box for another close range goal. McMeekin scored Carniny’s fourth when he was awarded a penalty after being bundled over in the box and stepped up to convert from the spot. 4-0 to Carniny HT.

The second half was much of the same from the Ballymena men when only two mins McMeekin completed his hat trick, taking the ball past the last man to put past the keeper and five nil. At this stage there appeared no way back into the game for Randalstown with McMeekin going on to score a further four goals to complete the rout capitalising on two poor clearances out from the keeper, scoring from close range with two snap shots at the keeper who parried the first out but just couldn’t manage to keep the second out and getting on the need of another Johnston delivery. Carniny into the quarters of the Zala Cup, and a super goal scoring display from Gary McMeekin netting seven on the day.