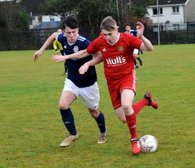 The seniors lost out to Michelin on Saturday on the wrong end of a 2-1 scoreline.

It was Michelin who opened the scoring in this game after 6 mins when former senior player Kevin Coogan whipped in a cross from the left wing to find the head of Corey Little who headed home to see the visitors take the lead. Then on 13 mins the reds conceded a free kick which was floated in and headed back across the Carniny box to see Cormac Lemon score Michelin's second.

Carniny made a couple of changes at the break and put the visitors under pressure and a well worked free kick saw Aidan Scullion play in Matthew McComb who reduced the deficit. The pressure continued with McComb hitting the post, but they just couldn't get their equaliser. A further attack saw Michael McCabe brought down in the box with no penalty and a blatant foul on McComb in the box also saw no penalty awarded with even the visitors admitting it was the proverbial 'stone waller'. Mark Butler had a late cahnce of a header at the back post but it went wide of the mark and Michelin saw out the win to take the 3 points.