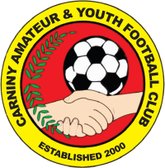 The 2013’s Carniny Colts participated for the second time in the 2012’s IFA tournament at the showgrounds on Friday night.

Despite playing against teams older, they recorded three victories and a draw out of their four fixtures.

The upfront striking partnership of Riley Fry and Caleb Scullion netted goals in all games played, while being fed from the midfield of Will Connaghty, Harry Nicholl and Emmet Campion.

Defenders of Conor Bell, Ryan Black and Harry Herbison did their level best to keep the goals out.

A very accomplished performance from such a young team.