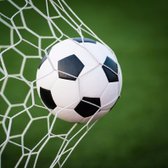 After a week off for the international break, the Crazy Stars were raring to go in this week’s home league tie against a strong Garforth Rangers Blue.

The fixture had been in doubt late on Friday when a much needed cut of the grass took away all our pitch lines! David once again came to the rescue working late into Friday evening to rake away the loose grass and re-mark the entire pitch. Thank you David.

With both teams neck and neck in the league and coming off previous defeats, this always looked like being a tight but competitive game, and that's exactly how things started. The Crazy Stars midfield partnership of Sian and Hannah were playing a key role protecting our defence from some strong Garforth attacks, but any balls that did get through were quickly swept up and cleared by Hans in goal, and Grace and Freya who are becoming a strong defensive partnership. The Crazy's were settling into the game nicely and on 15 minutes a neat midfield pass saw Martha attack down the right wing, cut inside her marker neatly, and blast a pile-driver hard at the near post, but with strong hands the keeper pushed the ball away. The Crazy's were quick to pounce on the loose ball still in the area, and as Martha took a defensive clearance clean in the stomach, the deflection broke to Maisie who calmly dinked the ball over the line to score her debut goal, and give the Crazy's a deserved lead.

The game now settled into a period of end to end play giving the crowd plenty to cheer about, and the Crazy Stars plenty to concentrate on in both attack and defence. A tactical switch saw Annie move back into her preferred position of defence, and Grace move up into midfield. The change brought instant benefits with Hannah picking up lots of loose ball in midfield and finding Maisie in space out on the wing to make some penetrative runs and great passes through to Martha up front. Just when it looked like the Crazy's might score again, Garforth picked up a corner, and after Freya made another of her great defensive clearances, the ball deflected back into the area, where the Garforth players were simply quicker to react, and poked the ball past a diving Hans to level things up just before half time.

So at 1-1 the girls had a well-deserved drink whilst David and Rick advised them on where the opportunities might be in the second half, and prepared Nicole for her stint in goal.

The second half started well for the Crazy's with Ash and Pippa controlling things in defence and nicely finding Maisie, Hannah and Grace who were all finding open space in midfield. This pressure led to three corners for the Crazy's but unfortunately nobody could quite latch onto Maisie's powerful crosses. Garforth were now taking more of a long-ball approach which Ash, Annie and Freya coped with very well. Garforth did pick up the odd corner, and from one corner Pippa took up her great near post position and deflected a powerful corner out of the area, but the Garforth corner taker smashed it straight back towards goal and with a wicked deflection it gave Nicole zero chance and Garforth a surprise 2-1 lead.

Having played so well it would have been understandable if the Crazy's heads had dropped a little, but their fighting spirit was clear to see and they had the vast majority of possession, and all the chances for the remainder of the game. Grace was finding acres of space down the left wing, but all the attacks were coming down the right side as we moved into the last 10 minutes. The Crazy's equalising goal came from a fantastic move when Maisie took a short throw in to Niamh, who turned neatly under control and played a premier league style through ball to Martha, who jinked left and right into the area leaving two Garforth defenders for dead, and as the goalie came rushing out, Martha kept 100% calm and pushed the ball neatly into the net to equalise, and create herself a brand new nickname 'Ice Cold Copeland'

At 2-2 with five minutes to play both teams threw caution to the wind to get the winner, but only the Crazy's ever looked like scoring, helped immensely by Hans solid work in defence combined with Nicole's great goal kicks keeping Garforth on the back foot. After another good build up from Pippa in defence, Maisie played the ball across the penalty area where Martha quickly fired a hard shot towards goal, but it wasn't to be the winner as the keeper sank to her knees to make a great save and hold the ball securely!
So the match ended 2-2 which was a fair reflection on the overall performance. Well done to both teams.

There were so many great individual performances today all the girls could have taken home the coach's award, but because of her cool control and calm build up play from defence, Pippa was awarded defender of the day. The coach’s overall player award went to ‘Ice Cold Copeland’ for the trouble she caused the opposition all day, her calm equalising goal, and her assist for the first goal. Parents player of the day went to Maisie for her overall brilliant debut performance.

A big thank you to the many parents who helped set up the pitch today, it really helped David and Rick run through some important drills with the girls and prepare them for the match. Thank you to Tracey for running the raffle, and to Angie for laying on the very welcome snacks and refreshments. See you all next time.