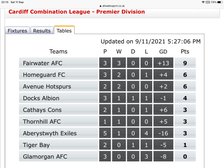 The Cons visited Aberystwyth Exiles on a sunny afternoon on a very lush pitch at the Cardiff University Playing fields, and got off to a dream start.

Buoyed by this great start, the Cons were controlling the game and on 36 minutes, Williams was again the provider, this time feeding fellow striker, Rob Condliffe, to run onto a finely weighted pass through the inside right channel, where he was able to strike from 12 yards out past a helpless keeper.

On the stroke of half time, following a Brad Baston long throw, the ball was contested by Rickie Jones on the right hand side of the Penalty Area, when it popped up in the air and fell to midfielder, Sion Morris, who lashed a fierce right footed shot high into the net from 15 yards out to give his side a well deserved 4-0 lead at the break.

The second half was only 9 minutes old when a Nicky Wood free kick was floated into the Penalty Area from the right hand side. The ball went over everyone and fell just passed the far post. Rickie Jones was first to the ball, swivelled and shot right footed across the keeper to score inside the far post.

Just after the hour the home side were reduced to 10 men, when their defender took exception to the fine hassling by Condliffe in chasing down the ball, and lashed out kicking Condliffe whilst he was on the floor, giving the referee no option other than to show him a red card.

It was now very much one way traffic and the Cons were able to get their sixth goal via a very fortunate deflection from a Morris shot which hit an Exiles player and gave his keeper no chance as he was completely wrong footed. The seventh followed two minutes later when centre back Gaz Lloyd brought the ball out of defence and threaded a very intelligent ball down the right hand side for the hard working Condliffe to run onto and cross into the area, where substitute, James Gollop was able to chest the ball home, on his knees, from 3 yards out.

With 8 minutes to go, the Exiles were able to grab a consolation goal, following some very lax defending down the Cons right hand side. The away side bounced straight back and just a minute later James Gollop burst down the right hand side and this time turned provider, by crossing for Condliffe to fire home, right footed, for his second goal of the game, and bring the score to 8-1 in the Cons favour, which was the final result.

It was a fine all round display by the Cons who played some very good football from front to back, and were able to completely control the game.