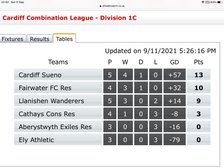 Having had a tough match less than 48 hours previously, the Cons travelled to Llanishen Wanderers looking for a win to keep alive their hopes of finishing in the top 2 of the Division C.

Their task was made all the more difficult when they lost strikers, Josh Edey and Mike Taylor after only 15 minutes, both due to injuries.

However sub, Steve Meyrick, making a welcome return to football with the Cons, gave his side the lead after 21 minutes, having been set up by Mason Lloyd.

However goals either side of half time saw the home team take the lead, which they were able to increase on the hour to give them a 3-1 advantage.

With the effects of the midweek game catching up on the Cons, their tired legs were unable to make any in roads into the deficit and the game finished 3-1.

A win in their final game, should hopefully see the Cons qualify for the the mid Division E, for the remainder of the Season.