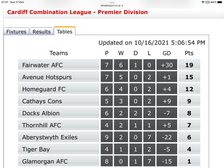 On a warm day deep into October the Cons welcomed Aberystwyth Exiles to the University Playing Fields, looking to create the double over them, having achieved a big win in the away fixture a couple of weeks earlier.

In a scrappy start to the game the Cons had more of the ball and most of the chances but were very wasteful and rash when they did create any meaningful chances. On the 20 minute mark the visitors came close to taking the lead, but a sliding block by centre back, Gaz Lloyd, cleared the ball on the goal line.

This scare woke up the home side, and they were able to take the lead on the half hour. Following great work from full back Dan Walsh bursting down the right wing, he cut into the penalty box before sliding a ball square to Rickie Jones who was able to take a touch to compose himself before calmly curling it over the defender and keeper into the top corner.

With the deadlock broken the Cons wasted no time in doubling their lead 10 minutes later. After some fine work by striker, Dave Williams, on the byeline, he was able to cut the ball back and find an unexpected Matthew Perry on the penalty spot. The left sided defender, who had been goalless for 8 seasons, calmly passed the ball into the bottom right corner using his weaker right foot.

With the wind now fully in their sails the Cons added a 3rd just before the break, when a Dylan Waddington corner was headed by centre back Harry Jones against a defender with the ball rebounding back to his feet, he was able to tap home from close range.

The second half was only two minutes old when Waddington again turned provider, this time dribbling through from midfield before slotting the ball through to Jon Counsell who had made a clever run before slotting calmly into the bottom right corner. Seven minutes later Waddington was again able add another assist, this time playing Williams through and he was able to finish neatly across the keeper to get a deserved goal for his hard work all afternoon.

Being 5-0 to the good after an hour the Cons tired, became sloppy and lost their dominance. A mistake at the back by the Cons midfield was taken full advantage of by the visitors, and the Exiles were able to get on the score sheet. Following this glimmer of hope, they were able to get a second 5 mins later after some more lazy defending.

This quick double strike got the Aber tails up, however, the home side were very soon able to reassert their authority when Waddington dribbled past two defenders before having two bites at the cherry to fire home a powerful effort and wrap up the points for his side.